The Big A is back in action!

Aqueduct Racetrack is up and running with a 15-day fall meet, with some of the better racing around in the weeks following the Breeders’ Cup.

The short meet runs four days a week, Thursday-Sunday through Dec. 5. Then the winter meet opens at the Big A without turf racing and continues through late March.

The fall met differs from the winter meet because there’s turf racing – lots of turf racing. Aqueduct features two grass courses, and the surfaces will be used to their fullest capacity if weather allows.

There’s also stakes races during the meet. Meaningful stakes are sparse in New York for much of December-February, but the first few weeks feature 21 stakes – nine graded — through Dec. 5.

Speaking of the 1 1/8-mile distance, it is surprisingly rarely-used these days at Aqueduct. Because of the main track circumference, dirt route races are run mostly around one turn. No races can be carded at 1 1/16 miles or 1 mile, 70 yards. Almost all Aqueduct routes will be one-turn miles (there will be a few 1 1/8-mile races, plus a smattering of longer events during the meets). There are so few two-turn races run at Aqueduct, that they are a virtual non-factor for handicappers throughout the season. 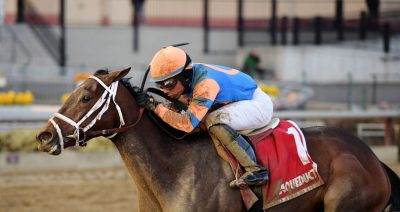 Four years of racing at the new Aqueduct are already in the books since the end of the inner track (it was replaced by a second turf course), we have a solid collection of stats to help us handicap the next six months. The main track has a limestone base instead of clay, enabling Aqueduct to conduct racing in freezing temperatures. Unlike the old inner track, races at 6 ½ furlongs and 7 furlongs and one-turn miles are now run all winter, not just in the fall, and as a handicapper you can mostly concentrate on one-turn racing, just like at Belmont.

The Aqueduct main track mostly has played fairly to all running styles – a far cry from the old Aqueduct inner track that usually favored speed. Now speed horses appear to have no real advantage against pressers, stalkers, or closers based only on their running style. If anything, off-the-pace runners might even have a slight edge because Aqueduct seems to have fewer wire-to-wire winners than the other main tracks on the New York circuit.

Aqueduct’s main track does often show itself to be at the mercy of anti-inside track biases. The overall prevailing profile of the Aqueduct main track often plays against inside paths, so you should factor this into your handicapping as the Aqueduct meet begins.

Interestingly, the slow rail on the Aqueduct main track does not always affect post position statistics, mainly because field sizes are relatively small and jockeys can usually work out off-the-rail trips even if they draw post 1 or 2. The jockeys all know to stay off the inside for the most part, so the post position statistics mostly are unaffected. We will see if this trend continues again this season.

On the turf, there are a few interesting post position angles to report at Aqueduct. In routes dating back to the opening of the new turf layout at Aqueduct, post positions have been mainly fair all the way on out to post 9. Everything outside of that, however, is awful. Turf horses breaking from posts 10-11-12 during a three-year span went a combined 5-for-155 for a terrible 2.5% win rate.  In turf sprints, Aqueduct does not play like Belmont and Saratoga which both tend to favor middle and outside horses in turf sprints. In the Big A’s turf sprints, the inside horses do well and suffer no disadvantage.

There’s plenty of good New York racing and wagering still to come the rest of the year. Good luck during the Aqueduct fall meet!