No matter what happens in the world of thoroughbred racing during the coronavirus pandemic, it’s still all about Hall of Fame trainer Bob Baffert.

From coast to coast, Baffert-trained horses wound up in the winner’s circle on a big Saturday of racing five weeks before the Kentucky Derby (G1) and just over three months before the Breeders’ Cup.

During the course of an afternoon that saw champion Midnight Bisou one of several favorites to lose (in the $500,000 Personal Ensign (G1) at Saratoga) Baffert wound up winning the day at the Spa and at Del Mar. 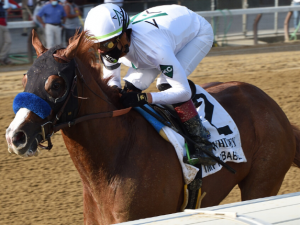 Improbable ($8.50) took charge in the stretch and won the $750,000 Whitney Stakes (G1) by two lengths over By My Standards, with even-money favorite Tom’s d’Etat stumbling at the start and finishing third.

The win moved Thousand Words, an early Derby top contender after winning the Robert B. Lewis Stakes (G3) in February, up to No. 7 on the Derby leaderboard with 83 points. Honor A.P. is at No. 3 with 140 points.

While Baffert’s undefeated Nadal and Charlatan are off the Derby trail, the five-time Derby winning trainer likely has a contender in Thousand Words, with yet another, Uncle Chuck, set to run in the Travers (G1) on Aug. 8. Baffert also trains Authentic, winner of the Haskell Invitational (G1) and No. 2 on the Derby leaderboard with 200 points.

The Whitney was the top race of the day, with 7-year-old Tom’s d’Etat looking for a fifth straight victory. But his return to the Spa after finishing fourth in the Woodward (G1) last year did not go well. After a few extra minutes to settle a few fractious horses in the gate (Improbable among them), Tom’s d’Etat stumbled at the start and lost all chance.

Improbable, ridden by Irad Ortiz, Jr., then tracked a slow pace set by Mr. Buff. When the field turned for home, the 4-year-old Improbable took charge in the stretch and cruised to the wire.

The win gave Improbable an automatic berth into the Breeders’ Cup Classic (G1) at Keeneland on Nov. 7.

For Baffert, it was his second Whitney win in a row – McKinzie won it last year.

“Finally, he’s grown up a little bit. He turned into a nice horse,’’ Ortiz said. “Mr. Baffert did a great job with him. He broke really good today. Honestly, I just took a little hold. I know Mr. Buff, he’s the speed of the race and I sat second. Last time, (Drayden) Van Dyke rode him second in the clear and he ran so good, so I just tried to do the same thing.

“He’s been like that since he was two or three,’’ Ortiz added. “We know him so I was ready for it. The starter did a great job. He stuck with the horse, he fixed it. Thank God everything broke well. We had a beautiful trip.”

Elliot Walden, CEO of co-owner WinStar Farm, said Improbable has “been so consistent throughout his career winning a Grade 1 at 2 (Los Alamitos Futurity), being the favorite for the Kentucky Derby (2019) and it’s been three years in a row that he’s continued to perform. It’s a credit to Bob and his whole team. The horse is a fabulous racehorse and the best is yet to come.”

In the Shared Belief, Thousand Words, with Abel Cedillo aboard, led from the start and covered the 1 1 1/16 miles in 1:43.85. The field was reduced to four starters after Uncle Chuck and Anneau d’Or were withdrawn.

“I told Abel to jump him out of there and I thought he and Cezanne would be 1-2,’’ Baffert said. “Turning for home I could tell that Honor A.P. wasn’t running like he usually does. Cezanne got really tired, but Thousand Words … I could tell when we got down here that he was a different horse from Los Alamitos and the real Thousand Words showed up today.

“His whole mind changed. His color has changed. He had soured out on me, but we got him going the right way. I think he earned his way to the Derby.”

“He ran well, but we’re disappointed he didn’t win,’’ Hall of Fame jockey Mike Smith said. “I haven’t been able to get on him in the mornings and I think that’s made a difference. He’s just been going along there not doing much in the mornings. I need to be on him and get more out of him. But that’s the way it is now; that’s just the way it is. This distance is short for him, too. Just not his day.”

This time, a thrilling stretch duel in the Personal Ensign (G1) did not go Midnight Bisou’s way.

The 5-year-old champion and 1-5 favorite came up neck short of Vexatious after a stretch-long attempt to get past the 6-year-old mare as she did a year ago in edging Elate by a nose in the 2019 edition.

After the race, an objection was filed claiming Vexatious, ridden by Jose Lezcano, interfered with Midnight Bisou, with Ricardo Santana, Jr. aboard, by veering out. After several minutes, the racing stewards declared the finish official: Vexatious, at 9-1 had pulled a huge upset at a track known as the Graveyard of Champions.

Midnight Bisou, trained by Hall of Famer Steve Asmussen, was without her regular rider in Hall of Famer Mike Smith, who was at Del Mar and riding Honor A.P. in the Shared Belief.

The win by Vexatious, trained by Jack Sisterson, was just the fourth of her 23-race career, her first Grade 1 victory, and ended an 0-for-9 losing streak. It was also the first Grade 1 win for Sisterson.

As part of the Breeders’ Cup challenge series, the Personal Ensign is a “Win and You’re In” race to the BC Distaff at Keeneland in November. 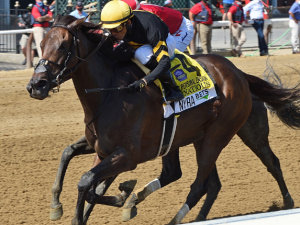 Vexatious, who returned $21 for a $2 win bet, is likely to show up, and so is Midnight Bisou, who has now finished second in three of her last four races

after piling up a seven-race win streak in 2019. Owned by Bloom Racing Stable and Madaket Stable, Midnight Bisou has a career mark of 22-13-6-3.

Motion Emotion was the pacesetter, with Vexatious running comfortably in second and Abounding Joy and Midnight Bisou next through the backstretch, with Point of Honor trailing.

When field entered the middle of the final turn, Vexatious took the lead with Midnight Bisou in hot pursuit challenging for the lead. But Calumet Farms’ Vexatious, a daughter of Giant’s Causeway, would not give in.

“My filly broke well. She was relaxed the whole way and just sitting behind the leader,’’ said Lezcano, who was aboard the mare in her previous start – second in the Ruffian (G2) on July 11. “I could feel the other filly (Midnight Bisou) coming and I started asking my filly. Every time the other filly came close to her, my filly dug in. I showed her to the other filly and she kept going. She kept running. We could have gone around one more time and I still would have been in front with my filly.”

Winning time for the 1 1/8 miles was 1:48.82. Point of Honor was, followed by Motion Emotion and Abounding Joy.

The day wasn’t a total loss for Asmussen as Echo Town ($16.40) took charge at the sixteenth-pole and pulled off to a 3 1/2–length victory over Tap it To Win, with Asmussen’s Shoplifted finishing third.

No Parole, the 3-1 favorite, ran ninth in the 11-horse field after taking the early lead but fading badly in the stretch.

Ridden by Ricardo Santana, Jr., Echo Town – winning his first stakes race — turned the tables on No Parole, who won the Vanderbilt (G1) at Belmont on June 20 — Echo Town was 3 ¾ lengths back in second. The Baffert-trained Eight Rings finished seventh.

“It was great to see him put it all together when it matters so much on this stage. He ran solidly here. He ran really well into the Woody Stephens, but I thought the timing of this race was better,” Asmussen said. “He’s run hard all year. He’s run consistently all year. Now, he will be noticed.”

Sadler’s Joy crossed the finish line first, but was disqualified to fourth for interfering with Cross Border ($6.40) who was declared the winner following a stewards’ inquiry.

“You could see I hit the hole when it opened and I saw the (other) horse, but I never came over,” Castellano said. “We were all on the same line and I think the inside horses were involved a little bit and we all ended up caught in an overreaction. Of course, that put everyone under pressure and they were going to blame the horse on the outside (Sadler’s Joy). It was a decision for the stewards.”

Collusion Illusion ($5.80) found an opening between horses in the stretch, moved to the rail and then held off a late-charging Lexitonian to win the 6-furlong Bing Crosby and earn an automatic berth in the Breeders’ Cup Sprint (G1) at Keeneland in November.

Sent off as the 9-5 favorite, the 3-year-old is now 4-for-5 (he did not finish in the Grade 1 American Pharoah Stakes last year).