Upset at the Spa: Midnight Bisou Beaten by Vexatious in Personal Ensign

This time, a thrilling stretch duel in the $500,000 Personal Ensign (G1) at Saratoga did not go Midnight Bisou’s way.

The 5-year-old champion and 1-5 favorite came up neck short of Vexatious after a stretch-long attempt to get past the 6-year-old mare as she did a year ago in edging Elate by a nose in the 2019 edition. 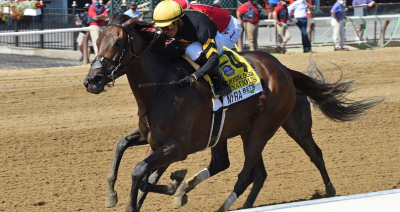 After the race, an objection was filed claiming Vexatious, ridden by Jose Lezcano, interfered with Midnight Bisou, with Ricardo Santana, Jr. aboard, by veering out. After several minutes, the racing stewards declared the finish official: Vexatious, at 9-1 had pulled a huge upset at a track known as the Graveyard of Champions.

Midnight Bisou, trained by Hall of Famer Steve Asmussen, was without her regular rider in Hall of Famer Mike Smith, who is at Del Mar and was unable  to be in New York due to coronavirus pandemic protocols set by racing officials limiting traveling from track to track.

The win by Vexatious, trained by Jack Sisterson, was just the fourth of her 23-race career, her first Grade 1 victory, and ended an 0-for-9 losing streak. It was also the first Grade 1 win for Sisterson.

As part of the Breeders’ Cup challenge series, the Personal Ensign is a “Win and You’re In” race to the BC Distaff at Keeneland in November.

Vexatious, who returned $21 for a $2 win bet, is likely to show up, and so is Midnight Bisou, who has now finished second in three of her last four races after piling up a seven-race win streak in 2019. Owned by Bloom Racing Stable and Madaket Stable, Midnight Bisou has a career mark of 22-13-6-3.

Motion Emotion was the pacesetter, with Vexatious running comfortably in second and Abounding Joy and Midnight Bisou next through the backstretch, with Point of Honor trailing.

When field entered the middle of the final turn, Vexatious took the lead with Midnight Bisou in hot pursuit challenging for the lead. But Calumet Farms’ Vexatious, a daughter of Giant’s Causeway, would not give in.

“My filly broke well. She was relaxed the whole way and just sitting behind the leader,’’ said Lezcano, who was aboard the mare in her previous start – second in the Ruffian (G2) on July 11. “I could feel the other filly (Midnight Bisou) coming and I started asking my filly. Every time the other filly came close to her, my filly dug in. I showed her to the other filly and she kept going. She kept running. We could have gone around one more time and I still would have been in front with my filly.”

When the other filly (Vexatious) came out and (Lezcano) was still hitting her left-handed, it looked like it stopped our filly’s momentum enough at that point,’’ Bloom said. “Then they came out one more time and it wasn’t massive but, to me, it looked like it was a momentum shift in a crucial point of the race.”

Bloom added: “Ricardo rode her well and he had her in a great spot. He talked to Mike (Smith) a couple of times about how she wants to be ridden and it just didn’t work out.”

Winning time for the 1 1/8 miles was 1:48.82. Point of Honor was, followed by Motion Emotion and Abounding Joy.

As for the BC Distaff, Sisterson said, “We’ll give her a well-deserved few days off and let her jump ahead a bit. Obviously, it’s a “Win and You’re In.” We’ll run her again before the Breeders’ Cup and look forward to being home at Keeneland.”

The Whitney was one of three Grade 1 races at Saratoga on Saturday; the others were the $300,000 H. Allen Jerkens Memorial and the $750,000 Whitney Stakes.