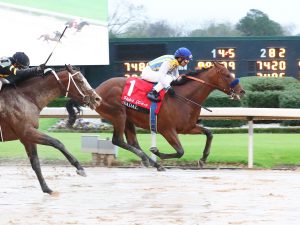 Each year the Arkansas Derby represents the end of yet another grueling Triple Crown Trail. Usually held three weeks before the Kentucky Derby (G1), the nine-furlong test has had a significant impact on the Run For the Roses since first contested in 1936 but moved up in stature in 2004 when the much-beloved Smarty Jones stormed through Hot Springs before winning both the Derby and the Preakness Stakes (G1).

And while this year the race’s scenario is decidedly different thanks to the postponement of the actual Run for the Roses due to the global Covid-19 pandemic to September 5, causing Oaklawn Park to push this race back to what would have been the actual day of the Kentucky Derby, racing fans will be treated to not only one Arkansas Derby, but two.

Due to the high number of entries, 11 will go postward in each division, with both offering Road the Derby points to the top-four finishers on a 100-40-20-10 schedule.

The last time the Arkansas Derby was split was in 1960; Spring Broker won the first division and Persian Gold won the second division. Neither started in that year’s Kentucky Derby, but both played a significant part in the history of the race especially relating to this year’s split event.

Even though the Arkansas Derby has only produced four Kentucky Derby winners overall, 69 Arkansas Derby runners made the Run for the Roses since 1997 and 51 since 2004 alone.

American Pharoah stands out at the most significant runner to have made his way to Louisville through Arkansas, taking Oaklawn Park’s signature race.

The Bob Baffert-trained colt, as we all know, went on to become the 12th Triple Crown winner since Affirmed in 1978 and quench a 37-year drought in the industry without one.

Country House was third here a year ago before going on to claim the controversial Kentucky Derby victory after the disqualification of Maximum Security from the win.

Fox Hill Farm’s Omaha Beach won this nine-furlong event and was labeled the Kentucky Derby’s favorite after the draw, but withdrawn two days before the race due to an entrapped epiglottis.

The weather for the Hot Springs area on Saturday is expected to be seasonal and very warm, but dry, with highs reaching into the lower 80s.

The D. Wayne Lukas-trained mare Althea defeated males in 1984 in a final time of 1:46.80, which remains the fastest Arkansas Derby in its 73-year history.