For days since the gates opened following the Del Mar meet, Santa Anita was either closed for training, or training hours were cut short to protect the animals and people stabled at the track.

Though the fire still rages, the smoke has pushed away from the Arcadia area and racing will go on. The opening-day card offers 10 races, several with full fields. The autumn season will be run over 16 days through Oct. 25 on a Wednesday-through-Sunday schedule, with racing on Columbus Day (Monday, Oct. 12). First-race post time is 2:30 p.m. PT. 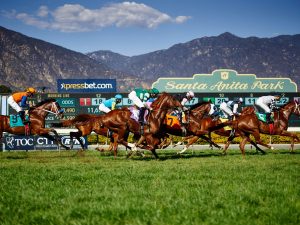 The $200,000 Eddie D Stakes (G2) – named for Hall of Fame jockey Eddie Delahoussaye — for 3-year-olds and up at 5 ½ furlongs on turf; and the $100,000 Chillingworth Stakes (G3) – named for longtime Oak Tree Racing Association official Sherwood Chillingworth – for fillies and mares 3 and up at 6 ½ furlongs on the main track, are co-featured on Friday.

Seven will head postward in the Chillingworth, which is the day’s sixth race, and the same number of runners were entered for the Eddie D, which has been carded as the seventh.

On Sunday, two additional Breeders’ Cup Challenge “Win and You’re In” races will be featured – the $200,000 Zenyatta Stakes (G2) for fillies and mares (Distaff) and the $200,000 Santa Anita Sprint Championship (G2), for 3-year-olds and up (Sprint). Also set to be contested Sunday but with no Breeders’ Cup implications will be the $100,000 Tokyo City Cup (G3).

Santa Anita remains closed to the general pubic due to the COVID-19 pandemic.

This year the Breeders’ Cup will be held at Keeneland on Nov. 6-7.In addition to the standard wagering menu, including win, place, show, exacta, trifecta, daily doubles, rolling daily double, rolling pick 3, pick 4, pick 5 and pick 6, this season the track will offer the Golden Hour Late Pick 4.