Another day, another update to the list of contenders for the 145th Preakness (G1) on Saturday (Oct. 3) at Pimlico Race Course.

A day after Kentucky Derby (G1) runner-up Tiz the Law was declared out of the Preakness, Max Player on Wednesday (Sept. 23) became the latest probable for what in 2020 is the final leg of the Triple Crown.

Tiz the Law won the Belmont Stakes (G1) on June 20 – the first leg after the Triple Crown schedule was reshuffled due to the COVID-19 pandemic. 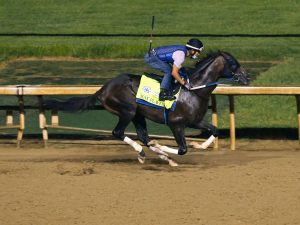 In the Derby on Sept. 5, the colt who had dominated the 3-year-old division ran second to Authentic, and on Tuesday the decision was made to skip the Preakness and train up to $6 million Breeders’ Cup Classic (G1) at Keeneland on Nov. 7.

Sent to Hall of Fame trainer Steve Asmussen from Linda Rice’s barn after the Travers by owner George Hall/SportBLX Thoroughbreds, the son of Honor Code has two victories in six career starts, and has been on the board in five of those races. He won the Withers (G3) at Aqueduct on Feb. 1.

“I’m very excited because I haven’t been in the Preakness yet,” said Hall, who owned 2011 Belmont winner Ruler on Ice. “Steve and I stay in close contact. He shares a lot of information with me, and we discuss things. So it’s been great. We both agreed we’d take a lot of things into consideration before there was a decision.”

Among them: Max Player looked like “he wanted to keep running” after the Derby; he’s been working well; “we felt the horse is at the peak of his game and ready to run;” and the feeling is he will be competitive in the 1 3-16-mile Preakness. Hall added that Paco Lopez will be aboard Max Player.

A decision is still pending regarding the filly Swiss Skydiver, who finished second to Art Collector in the Blue Grass (G2) in her first race against males. Trainer Ken McPeek is saying he’ll make his decision after the Alabama (G1) winner works at Churchill Downs on Saturday. Champion filly Rachel Alexandra, trained by Asmussen, won the Preakness in 2011 – the first female to win the race in 75 years.

The post-position draw for the Preakness is Monday.

Other probables for the Preakness, which will be run without spectators, include Mr. Big News, Pneumatic, Thousand Words, supplementary entries Liveyourbeastlife and Jesus’ Team. Possibles include Mystic Guide and a pair of Todd Pletcher trainees, Dr Post and Happy Saver.