It’s Little Brown Jug Week, And We Do Care

The harness racing season continues to move forward, and this week’s big event is the Little Brown Jug on Thursday that caps off a most prestigious few days of pacing at the Delaware County Fair.

The Little Brown Jug is one of the few true American throwback racing events left (despite no fair-goers this week). Race week provides not only families showing up to feed the chickens, have their kids get their faces painted, and check out the results of the many completed projects by the local 4-H club. Plus, they get to watch some pretty good harness racing.

The first two days of the meet saw mostly Ohio Breeders Cup action, but it’s Wednesday and Thursday when the stars come out to race. 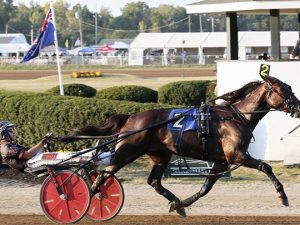 On Wednesday (Sept. 23), the Jugette for 3-year old filly pacers is the main event. Eleven are entered; there are two eliminations and then at day’s end, a winner-take-all final. The fillies have combined for 32 victories in 2020 and are led by Party Girl Hill, who 9-for-9 with $482,181 in earnings. She is trained by Chris Ryder and will be driven by Dexter Dunn.

Lyons Sentinel may be just 1-5-0 in seven starts, but with $202,000 in earnings, she is more than capable of pulling an upset and will get to battle Party Girl Hill in the second elimination.

The Jug races, unlike the Hambletonian and Hambletonian Oaks, still has both the boys and girls race twice in one day. The top four in each elimination advance to the final.

The field for the 50th Jugette:

The 75th Little Brown Jug is the final race of a 20-race card with a scheduled post time of 7:36 pm ET. Fourteen 3-year-old pacers are entered, making for two seven-horse eliminations with the top four advancing to the final. The 14 have combined for 35 victories and no one is hotter than the morning-line favorite, Warrawee Vital, who has won three straight and is 6-2-0 in nine starts.

Unlike the Jugette, the field is balanced, which is a bettor’s delight because there are lots of options to ponder. Six of the 14 have earned between $135,000 and $222,366. I’m thinking it should come down to Chief Mate, Catch The Fire and Warrawee Vital and with the smaller track (half-mile), I have a hunch that Catch the Fire will prevail.

The field for the Little Brown Jug:

Jug Week harkens back to the days where harness racing was a major event in America; where 10 to 15,000 went to the harness track on a Saturday night to see standardbreds pace and trot. Harness racing is conducted at fairs all spring, summer and fall and in a way, Jug Week at the Delaware County Fair speaks for all of them, from Iowa to Pennsylvania, to Maine and New York. Thankfully, most years, Delaware, Ohio is a place for fans of harness racing to be seen. Here’s to hoping that fans can return in 2021.

Upsets happen in harness racing, but to see how 60-1 long shot Chestnut Hill pulled off the stunner in the $560,000 (CDN) Canadian Trotting Classic at Woodbine Mohawk Park was nothing short of spectacular.

The colt sat a boxed in fifth through three-quarters and in deep stretch the leader, Ready For Moni, made a break as did another horse. Not only did Chestnut Hill avoid the two breakers, he went right, left and then slithered to the rail and got home to pull the gigantic upset, paying $122 to his supporters.

In the other big race at WMP, Hambletonian champ Ramona Hill toyed with the field in the $350,000 (CDN) Elegantimage, winning by four lengths in 1:51.3.

For the first time since March 12, there was racing at Monticello Raceway. In late May and early June, many harness tracks resumed racing despite the fact that the casinos attached to them remained shuttered. In New York, Buffalo, Batavia, Saratoga, Vernon, Tioga and Yonkers came back to racing — Monticello did not. Gov. Andrew Cuomo gave casinos the green light to reopen at 25% capacity and after nine days, Monticello resumed its 2020 season.

Saratoga Casino Hotel was looking at a mid-October shut down, but now says they can get to Thanksgiving thanks to its casino reopening.

In reality, they do care

Those that love harness racing would like to see the sport sustain itself without casino revenues and perhaps the pandemic served as a warning that this should be prioritized.

Some feel that if casinos had their way and were not bound by laws, they would tear down racing tracks to expand their operations.

That may not be the truth after all. Places like the above mentioned New York tracks along with Hoosier Park, Scioto Downs, Northfield Park and others could have sat back and waited for casinos to reopen before resuming racing, but chose to forge and get the pacers and trotters back to action.

Scioto was the first, opening on the Friday of Memorial Day weekend and the track enjoyed record handle numbers and that was with no fans on the grounds. New York tracks were allowed to reopen on June 3 and soon after, Yonkers, Saratoga, Buffalo, Vernon, Tioga and eventually Batavia all did so.

Maybe the casinos like harness racing. With what some call an oversaturation of casinos, harness racing can provide another diversion to get more people on the grounds. Sure, the casinos knew that bettors would bet, but they did stick their neck out by providing purse monies without the benefit of casino revenue and for that, kudos should be in order.

The days of 15,000 on a Saturday night may be few and far between, but based on what casinos did to get back to racing might mean that harness racing is in better shape than many thought.