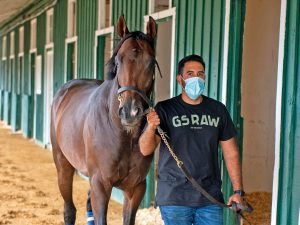 He ran respectably in his last three races – Haskell (fourth), Pegasus (second), Jim Dandy (third) – but never showed anything to make you think he could win a classic. That didn’t deter his owner from supplementing him for $25,000 to the Preakness. A 4-furlong breeze in 47.80 seconds Sept. 19 at Monmouth Park prompted the investment.

“I explained to the owner the races available to him, and he thinks the best decision was to run in the Preakness,” trainer Jose D’Angelo said. “He’s very, very good right now, and the Preakness is a great race for us.”

Jesus’ Team has won only twice, in a $32,000 maiden claimer and a claimer. As for his name, there’s no religious connotation. He’s named after the owner’s son.

He’s a deep closer, so don’t expect him to give Authentic any trouble up front. Jesus’ Team was more than seven lengths behind the Derby winner in the Haskell, and they’re not close to being in the same league.

“In all his races, and in all his works, I think he runs his best race last to front,” said D’Angelo. “Only one move. I think that will be his best way in the Preakness.”

Best-case scenario: Jesus’ Team passes tired horses late and plods up for third or fourth. No matter what his odds are, don’t bet him to win.

Notes: D’Angelo, a native of Venezuela, is the son of Francisco D’Angelo, a champion trainer in his homeland before coming to the United States five years ago. Both are based at Gulfstream Park. Jose assisted his father before saddling his first winner in July 2019.