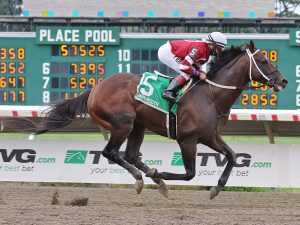 He didn’t make his career debut until Feb. 15 at Oaklawn, where he won his first two races and created a lot of buzz. In only his third career start, Pneumatic ran a creditable third behind standouts Maxfield and Ny Traffic in the Matt Winn Stakes at Churchill Downs. A decent fourth-place finish in the Belmont Stakes preceded a 2 1/4-length win in the Pegasus at Monmouth Park three weeks before the Derby.

He’s a son of one of the world’s top sires, Uncle Mo, whose progeny often win first time out and excel as 2-year-olds. Pneumatic is an exception to that trend.

“He’s just been a late-maturing horse,” said Scott Blasi, assistant to Hall of Fame trainer Steve Asmussen. “This race being later in the year has allowed him to come along and come around at his own rate. It just seemed like a good spot after the race at Monmouth.”

Notes: Turned in a 5-furlong bullet work of 1:00.85 over Saratoga’s deep Oklahoma training track on Sept. 21. “On this track that’s about as good as horses work,” Blasi said. “He’s trained really good since the Pegasus. We expect a big effort in the Preakness.” … Hall of Famer Asmussen, 54, won the Preakness with Curlin (2007) and the filly Rachel Alexandra (2009). He recently surpassed 9,000 wins and trails the all-time leader, the late Dale Baird (9,445).