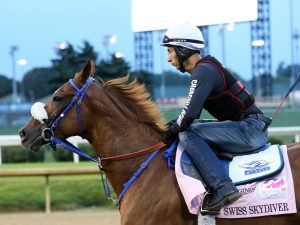 Despite her loss to long shot Shedaresthedevil in the Kentucky Oaks, Swiss Skydiver remains the leader of the 3-year-old filly division. In her last six races, all stakes, she has four wins and two seconds.

Trainer Kenny McPeek never has minded taking chances, and he’s already run her against males this year, a creditable second, beaten 3 1/2 lengths, against Preakness rival Art Collector in the Blue Grass Stakes. A 5-furlong workout in 1:00.80 Saturday at Churchill Downs convinced him to take on the boys again.

“Two horses in there look pretty formidable,” he said, meaning Derby winner Authentic and Art Collector. “Beyond that, we ought to be tough. The filly sure is doing good.”

Robby Albarado replaces 2019 Preakness winner Tyler Gaffalione, who will be riding this weekend at Keeneland. Albarado, 47, used to be an elite rider but has struggled the past few years. He won the 2007 Preakness and Breeders’ Cup Classic on Curlin and also rode 2004 Horse of the Year Mineshaft. He won only 24 races in 2019 and has 21 victories this year.

“It’s not like Robby has lost anything off his fastball or anything,” McPeek told drf.com. “He’s a big-game rider who just hasn’t had many big-game mounts lately.”

Notes: Her sire is Daredevil and she’s named for a human daredevil, Callie Rasnake, granddaughter of owner Peter Callahan. Late in the fall of 2018, Callahan was looking for a name to tie in with Daredevil. That’s when he got a text from Rasnake, who was spending a college semester in Europe. It said: “Here I am skydiving in the Swiss Alps,” and she really was. His immediate response: “That’s the name — Swiss Skydiver.” … McPeek trained 2002 Belmont Stakes winner Sarava, whose $142.50 win payoff is among the biggest in Triple Crown history … The 58-year-old Kentuckian is 0-for-5 in the Preakness, with his best finish a third by 31-1 shot Senior Investment in 2017 … Five fillies have won the Preakness, with Rachel Alexandra (2009) the last to do it.