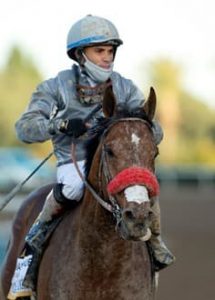 The leading riders at the New York winter meet at Aqueduct are Dylan Davis, Trevor McCarthy, Kendrick Carmouche, and Manny Franco. In a month or so, that will begin to change as the best riders in the game return home for the spring.

The slimmed down winter riding colony will beef up considerably for the Big A spring meet, the start of the Belmont meet at the end of April, and the Saratoga summer season. The Ortiz brothers, Irad and Jose, are returning. So are Joel Rosario, Luis Saez, and John Velazquez.

And now comes the news top West Coast riders Flavien Prat and Umberto Rispoli are relocating to New York. A star-studded lineup for sure.

The exodus to New York starts after the Gulfstream winter meet, followed by the days after the Santa Anita Derby (G1) on April 9, and the end of Keeneland meet, which runs April 8-29.

Prat and Rispoli are set to start riding in New York after the Santa Anita Derby. Both said they are leaving southern California for better top-level stakes opportunities. For Prat, there’s likely a better chance he can win enough races to compete for an Eclipse Award as the nation’s top jockey. He was a finalist in 2021, with Rosario winning and Irad Ortiz second.

Prat already had plans to ship out of California for Dubai World Cup Day, where he will have mounts on Hot Rod Charlie in the World Cup (G1), Pinehurst in the UAE Derby (G2), and Dr. Schivel in the Golden Shaheen. Prat will then return to Santa Anita through the Santa Anita Derby card before moving to Keeneland and then New York.

Prat, 29, a native of France, owns multiple riding titles at Santa Anita and Del Mar and is the runaway leading jockey at the current Santa Anita meet with 62 wins from 205 mounts (30%). He leads the Santa Anita standings by 26 wins over second-leading jockey Juan Hernandez with 36. Prat won 246 races with purses of $23,214,813 in 2021, which both marked career bests. 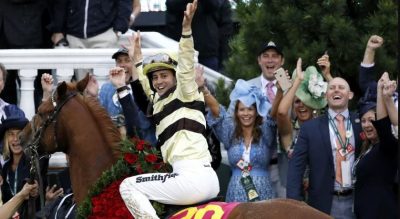 Rispoli, 33, a native of Italy, burst on the scene a few years ago and made a big run at the 2020 Del Mar summer riding title until settling for second with 49 victories, one short of Prat’s meet-leading 50. Since then, Rispoli has been a fixture in the top 3 at nearly every SoCal race meet, but he is currently only seventh in the Santa Anita winter standings with 16 wins from 119 mounts (13%).

Whether or not Prat and Rispoli can crack the top 5 in New York is anyone’s guess, and it also remains to be seen what impact their arrival will have on New York’s leading winter riders, who annually struggle to maintain any live mounts at Belmont and Saratoga.

Dylan Davis has enjoyed a breakout winter season at Aqueduct with 52 wins from 244 starts (22%). The same has been true to a lesser extent for McCarthy (45-for-256, 18%) and Carmouche (43-for-233, 18%). Jose Lezcano also stayed put in New York this winter and has done well with a record of 31-for-193, 16%.  These are the types of riders that will be hurt by the arrival of Prat and Rispoli. They are likely to see their win percentages plunge into the 5-10% range at Belmont and Saratoga.

The departure of Prat and Rispoli opens up all kinds of opportunities in the SoCal riding colony, where the leading rider this summer now projects to be Juan Hernandez. Diego Herrera, Abel Cedillo, and Tyler Baze all figure to move up in the standings, barring the arrival of a new big-name jockey coming to ride at Del Mar to fill the void.