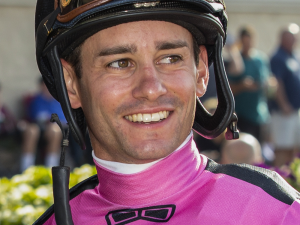 The year 2020 will go down as one of the strangest in thoroughbred racing, with no fans in attendance most of the year, many tracks closed for significant amounts of time, and a Triple Crown that was run out of order.

For horseplayers who like to follow the jockeys, it was a notable year for several riders, both obvious and not-so-obvious, who should be recognized for their various riding achievements at meets around the country.

Jockey Irad Ortiz Jr. continued to ride at the top of his game, and seems to be on his way to another Eclipse Award for Outstanding Jockey of 2020. He captured seven Grade 1 wins, including aboard Mucho Gusto in Gulfstream’s Pegasus World Cup, and aboard Improbable in Saratoga’s Whitney. He’s totaled $20,671,000 in purses (through Dec. 16). He won two Breeders’ Cup races including the Sprint with Whitmore, and the Juvenile Turf Sprint (G2) aboard Golden Pal.

Irad won the Saratoga riding title, 59 wins to 58 wins over his brother, Jose Ortiz, after a meet-long battle for the title that also included Joel Rosario, who finished third with 48 wins. Irad was the cash-in rider of all cash-in riders in Saratoga’s dirt races, where he racked up 35 wins (25%) for the meet. Jose, meanwhile, dominated on the turf with 31 Spa victories (23%). Jose Ortiz then cashed in at the Belmont fall meet, where he ran away with the jockey title with 40 wins from 173 mounts (23 percent), which was good for a 12-win margin over Jose Lezcano. At Aqueduct this fall, the breakout star atop the jockey standings has been veteran Kendrick Carmouche, who was a boon to bettors when he trounced the big names to win the title with 23 wins and a solid ROI. He’s also leading the current winter meet with 12 wins from 31 mounts for an impressive 39%.

In Kentucky in 2020, it was the year of Tyler Gaffalione, who swept all five major meets and ranked second behind Irad Ortiz, Jr. among all jockeys in wins this calendar year, and won over $15 million in purses. Gaffalione backers cashed in at Kentucky Downs, where he amassed 11 wins from just 45 mounts for 24% wins and a giant 62 percent ITM. Keep in mind that was with field sizes of about 11 horses per race. Add that to Churchill spring and September titles, plus titles at Keeneland summer and Keeneland fall where he ran away with the meet title by eight wins with 24 victories, and Gaffalione was the man to cash in on in Kentucky.

Special honorable mentions go out to jockeys Luis Saez and Mitchell Murrill for their outstanding, yet quieter, work at the Keeneland fall meet. Saez made the most of just 22 mounts to win nine times (41% wins and 68% ITM), including a handful of stakes. Murrill, meanwhile, who cashed in as the second-leading rider at Fair Grounds in 2019-2020, rode five winners from 40 Keeneland fall starters, which was 13% riding mostly longshot horses. His average win price among his five winners was a profitable $30.40. Perhaps that’s why Murrill’s hashtag is #betmitchgetrich.

Santana, as usual, soars at Oaklawn

Remember during the darkest days of the lockdown when racing at Oaklawn Park was one of the only games in town? Well it was no surprise that perennial leading rider Ricardo Santana, Jr. was leading jockey at the meet with 61 victories from 309 mounts for 21% with 46 percent ITM. It is never a surprise when Santana cashes in at Oaklawn, but you may have forgotten about another big-name rider who also rode at Oaklawn in 2020 after New York tracks closed. An Oaklawn honorable mention goes out to Joel Rosario, who picked up 45 mounts in Hot Springs and made the best of them to the tune of 17 wins for a huge 38% win rate with 76% ITM. Keep an eye on Rosario in 2021 to see if he spends any significant time at Oaklawn.

In SoCal, it would come as a shock to nobody to recognize Flavien Prat as the top cash-in rider of 2020. He rode at 27% during both Santa Anita meets, including 90 victories during the 2019-2020 winter/spring meet (29 wins ahead of second-place Abel Cedillo). However, special shout outs go to some other SoCal riders who distinguished themselves in 2020, including the aforementioned Cedillo, who won the Del Mar fall meet 19 wins to 14 over Prat, and then won 14 races at the Santa Anita fall meet with an average win price of $10.30. Cedillo’s 14 wins included a meet-high seven juvenile wins from 24 starters (29%). Also, don’t forget about the epic battle put up by Umberto Rispoli for the Del Mar summer riding title, which he lost to Prat by one win – 50 to 49. Prat rode favorites, and even though Rispoli lost the jockey win title, he blew away Prat in terms of ROI.

Finally, Sheldon Russell is running away atop the current Laurel meet jockey standings with 42 wins and a 27% win rate. His average win payoff is not too shabby at $9.70, and his winning percentage with 2-year-olds is eye-popping with 12 wins from 33 mounts (36%).