Kentucky Derby Horses: From Airstreem to Zimba Warrior, a total of 347 3-year-old thoroughbreds were made eligible to compete in the Triple 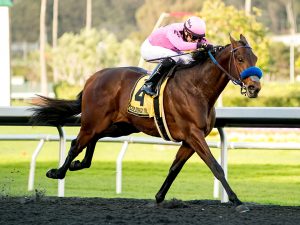 Storm the Court, voted 2-year-old male champion after his upset victory in the Breeders’ Cup Juvenile (G1), as well as the usual slew of horses from the barns of Hall of Famers Bob Baffert and Steve Asmussen, and Todd Pletcher highlight the list.

In addition to Storm the Court, six other Grade 1 winners were nominated:

The nominations were released Feb. 5.

Each of the horses became eligible through a $600 payment to allow them to compete in any of the three Classics: –

Storm the Court, trained by Peter Eurton and owned by Exline-Border Racing, David Bernsen, Susanna Wilson and Dan Hudock, is 4-2-0-1 heading into his 3-year-old debut, most likely in Sunday’s $200,000 San Vicente (G2) at Santa Anita. He won the BC Juvenile by a head at 45-1 odds over Anneau d’Or, also nominated for the Classics.

Pletcher led all trainers with 26 nominations, while Asmussen has 21 and two-time Triple Crown winner Baffert had 19 – 19.02 percent of all the nominations. The training trio has combined for 23 Triple Crown race wins – 15 for Baffert, five for Pletcher and three for Asmussen.

Among Bob Baffert’s contenders this year are:

Some of Steve Asmussen’s are:

A total of 35 nominees are based outside North America, including 20 from Japan led Vacation and Dieu du Vin. Eleven horses were nominated from Ireland, including six from trainer Aidan O’Brien and three from his son Joseph.

There is a late nomination phase through March 30 that requires a $6,000 payment for horses not nominated in the first phase. For owners making a late choice to nominate, there is a supplemental fee due at time of entry ($200,000 for the Derby, $150,000 for the Preakness, $50,000 for the Belmont).

As this weekend’s Pool 2 of the Kentucky Derby Wager opens, Tiz the Law, winner off the Holy Bull (G3) last week in his 3-year-old debut, is the individual favorite at 8-1, ahead of Independence Hall at 10-1. The mutuel field is 5-2.

Register for an account with UsRacing.com, and get your action on the best Kentucky Derby Horses!