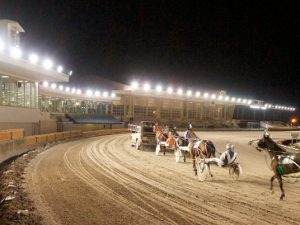 On Saturday, July 20, Buffalo Raceway raced for the final time in 2019. As 16-1 long shot Lucky Millionaire bolted to the lead in a $4,400 Class D claiming race, fans again were watching the true grinders of harness racing. In the end, “Millionaire” would give way to winner Story Book and Holla At UrBoy, but for his efforts, the “Lucky One” earned $528.

Buffalo Raceway is located in the town of Hamburg, New York, 20 minutes south of Buffalo, and like many harness tracks shares space with a casino, Hamburg Gaming. Like most tracks, the majority of the patrons are in the casino, paying little attention to the horses. But things may be changing.

It was a good 2019 for Buffalo, a track that races from late January to mid-July. This year, purses were up, handle was up as were the number of horses. Last year, horse shortages caused some cancellations, but that wasn’t the case this year. Mother Nature also cooperated and this year, the raceway was able to get its 66 days of racing in.

Jon Cramer has been the Director of Operations at the track for over a decade. He cites several factors for the track’s success.

“Our live handle was up 22 per cent and our export handle was up 11 per cent,’’ he said.  “Field sizes were up and purses were distributed to many horsemen. Dave Dylo (the track superintendent) did a great job with the new track surface as well.”

The clubhouse — which provides a nice, comfortable view — offered made-to-order food and a better menu so fans could watch and dine primarily on Wednesdays, Fridays and Saturdays.

Buffalo Raceway also is a bit unique in that there’s no post drag — a facet many harness racing fans lament. The horses are on the track, the clock says “0 MTP,” (zero minutes to post) and 10 minutes later, the race finally begins. We know why this exists. Tracks don’t want to run simultaneously, so they will hold horses at Northfield until Yonkers runs a race and vice versa. Some say it is a necessary evil, others say it should it end, and all agree it is an inconvenience. It makes the last two minutes of a college basketball game speed past.

With Buffalo Raceway done for the year, you may be wondering where the horses, drivers and trainers go for the second half of the year. The answer lies 45 miles to the east at Batavia Downs.

The Downs is the oldest lighted harness track in the United States (Freehold Raceway is the oldest harness track). It is situated halfway from Buffalo and Rochester and like Buffalo Raceway, shares land with a casino. The Downs picks up where Buffalo leaves off, running from mid-July to mid-December; if you’re a horseman in Western New York, you don’t have to worry about where to race because there are 131 days between the two tracks. Because of this, drivers don’t necessarily have to scramble away like they do at places that take three and four months off.

“You can make a living there,” said driver Shawn Gray. “The tracks are close enough, the purses decent enough where you can make some money.

“I moved from Maine to Buffalo in 2012 and did well there, but it was far away from my family. But Buffalo and Batavia were good to me.”

Gray now lives in Saratoga and races at Saratoga Casino Hotel and Plainridge Park in Massachusetts, a 400-mile round-trip.

Both tracks are half-miles; Buffalo has tight turns and a long straightaway while Batavia has more forgiving turns and a shorter straightaway. As for racing, our friend Lucky Millionaire raced on Wednesday, July 31, and once again, finished third in a $3,300 pace, collecting another $396 in the process. I’m not sure he noticed the difference between the two tracks, but his connections cashed another check and will prep him for his next race.

2019 is a very big year for Batavia Downs. For the first time, the track will host the finals of the New York State Sire Stakes for 2- and 3-year old fillies, colts and geldings.  There will be eight races with each carrying a $225,000 purse on Saturday, Sept. 14.  In addition, the $50,000 Kane Memorial Pace for older horses will take place that evening.  Some pretty good horses have won this event, including the richest harness horse of all time, Foiled Again, who won it three times, and Bolt The Duer, who took honors in 2014 two years after he won the Messenger Stakes and the Adios  How good was Bolt the Duer? His personal best for a mile — 1:47.4.

New York has seven harness tracks and most of the time, the Sire Stakes finals are contested at Yonkers, so for Batavia, getting the finals was a nice score.

“We are thrilled to host the finals of the premier event for New York bred horses,” said Director of Racing Todd Haight.  “Batavia has been involved in the series since 1965 and we look forward to a ‘Night of Champions’ on September 14.”

Like Buffalo, Batavia has benefited from the casino revenues and purses are up this year and the first two weeks of the season has seen an increase in handle. And, even attendance is up by 16 percent.

“While we are very pleased with our handle numbers, the most impressive stat might be the live attendance,” said Haight.  “Our opening night crowd was unbelievable and that carried over into the (first) weekend. We had the New York Sire Stakes (NYSS) and some really nice weather which helped, but there is a definite buzz about our championship meet in the area this year.”

So, when you hear that harness racing is suffering and in decline, perhaps a ride down the New York State Thruway might paint a different picture.