It has already been a remarkable meet for the fillies at Saratoga Race Course.

Thus far, we have witnessed Guarana keep her undefeated streak alive in the Coaching Club American Oaks (G1), Concrete Rose score a pacesetting win in the inaugural Saratoga Oaks, Covfefe outgame Serengeti Empress in the Test (G1) and Got Stormy beat the boys in the Fourstardave (G1).

One of the venerable events at the Spa, the 1 ¼-mile Alabama will be run for the 139th time.

The latest edition attracted a field of nine for one of the last top-tier tests in the division. After Saturday, the last remaining goal for leading 3-year-old fillies is the $1 million Cotillion (G1) on Sept. 21 at Parx. 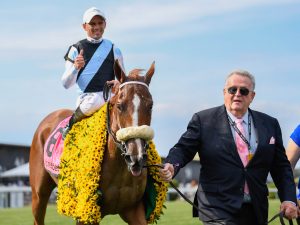 No doubt, Point of Honor will attract considerable support at the betting windows leading up to the Alabama. There is plenty to like about this chestnut daughter of Curlin from the George Weaver barn.

She has already had a race over the track this year, finishing second by a game length to Guarana in the C.C.A. Oaks in what was a career-best performance.

Javier Castellano, a three-time Alabama winner, has the mount from post 7.

The 10-furlong distance is a question mark for every runner in this race. Given her pedigree and progress to this point, Weaver is confident Point of Honor rises to the challenge.

“She’s bred to handle it,” the former assistant to Todd Pletcher said. “This is the race we’ve had in the back of our minds for several months now. It’s going to be up to her and Javier to figure out how to get the win.”

Earlier in the year, Point of Honor scored stakes wins in the Black-Eyed Susan (G2) at Pimlico and the Suncoast at Tampa Bay Downs.

A major point in her favor: Guarana is sitting out this one to prepare for the Cotillion.

Trainer Larry Jones has a well-deserved reputation as a developer of fillies. Jones, who won this race with Proud Spell in 2008, returns with Street Band, fresh from a victory in the Indiana Oaks (G3). It was her second stakes win in the last three outings, having captured the Fair Grounds Oaks (G2) before finishing up the track in the Kentucky Oaks (G1).

Street Band joins Dunbar Road and Lady Apple as the trio of contenders stepping up to the Alabama plate following stakes wins.

Afleet Destiny, Champagne Anyone, Ulele, Off Topic and Kelsey’s Cross complete the field.

Alabama Day is a filly festival at Saratoga as the supporting stakes are a pair of distaff turf races: the $200,000 Lake Placid (G2) for 3-year-olds and the $100,000 Smart N Fancy for sprinters.

The Lake Placid features a rematch from the three-horse Lake George (G3) last month between the 1-2 finishers, Regal Glory and Blowout who are both trained by Brown.

The Lake George produced a mild upset as Regal Glory at 2-1 bested 6-5 favorite Blowout by a half length.

This field will be deeper and larger with seven entrants for the 1 1-16 mile test.

Varenka should be very dangerous from the rail following an allowance win here last month. Her most notable effort to date was a hard-charging rally to get fifth last November in the Breeders’ Cup Juvenile Fillies Turf (G1).

In the Smart N Fancy, Fire Key holds the experience edge. This will be the 31st start for the 6-year-old trained by Jim Ryerson as she bids for her ninth career win.

Oleksandra is an intriguing factor. She is trained by Neil Drysdale, rarely seen in these parts, and drops in here following a third-place effort as the 7-5 favorite in the Royal North (G2) at Woodbine.