Just when you thought Chad Brown couldn’t come up with another really big one-day score, the trainer with the magic turf touch took things to a higher level.

Sure enough, Brown has been the nation’s leading trainer these past three years, and he’s the leader again this year. And sure enough he’s won the Eclipse Award as Outstanding Trainer over the same period, and likely will win it again this year – maybe unanimously?

You can also say success breeds success and he’s been sent some of the world’s best horses to train, but Saturday was pretty special no matter how you look at it.

Horses under Brown’s care put on a memorable performance: a sweep of all four graded-stakes races at Arlington International Racecourse, including the Arlington Million by leading Horse of the Year contender Bricks and Mortar, within a two-hour span.

All Brown seemed to do was toddle on down to the winner’s circle from a private box, pose for pictures, and smile. He has mastered the one-day stand at Arlington.

A few minutes before Brown’s Arlington streak began, he took in the $500,000 Fourstardave from Saratoga Race Course. He had three entries, but the best he could do was second (Raging Bull), fifth (Made You Look). Get Stormy won for trainer Mark Casse, becoming the first filly to win the Grade 1 race.

Then came Chad Time at the track just outside Chicago, starting with the $600,000 Beverly D for fillies and mares at 1 3/16 miles. Sistercharlie, sent off as the 2-5 favorite with John Velazquez aboard, cruised home to a three-length victory in winning the race for the second year in a row. Brown’s other entries, Competitionforideas and Thais ran third and fifth, respectively.

Owned by Peter Brant, 5-year-old Sistercharlie won the Diana (G1) at Saratoga on July 19 in her only other start this year, and now has a five-race winning streak. The Breeders’ Cup Challenge “Win and You’re In” race gives Sistercharlie an automatic berth in the Breeders’ Cup Filly & Mare Turf (G1).

On to the $500,000 Secretariat Stakes for 3-year-olds going a mile. Again, Brown sent out the favorite – Fog of War and Valid Point were considered co-favorites. It was e Five Racing Thoroughbreds and Mike Ryan’sValid Point, under Javier Castellano, who rallied from seventh to first in the final quarter-mile for a one length victory. Fog of War finished sixth.

Then came the 37th running of the Million, another “Win and You’re In” race for 3-year-olds and up going 1 ¼ miles.

A field of 10 went to the post, but the pre-race talk was all Bricks and Mortar, who has made a sensational comeback since being sidelined for more than year with an injury. Waiting for just the right moment in the stretch to strike, jockey Irad Ortiz Jr., guided 8-5 favorite Bricks and Mortar into the lead with a sixteenth to go and won by three-quarters of a length. 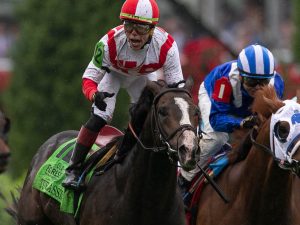 Bricks and Mortar, a 5-year-old son of Giant’s Causeway, has won five in a row since his return, including four Grade 1’s.  According to co-owner Seth Klarman of Klaravich Stables, it’s up to Brown whether or not the horse will train up to the Breeders’ Cup at Santa Anita on Nov. 1-2.

Back at Saratoga on Sunday, Brown said Bricks and Mortar has had “a remarkable year. Flawless. He’s a very rare horse and we’re lucky to have him. He’s had an outstanding career.’

After the Million, Klarman was asked about Horse of the Year possibilities: “I think there’s a chance. I don’t want to get ahead of myself. If somebody else steps up,that’s fine. Right now he’s what we’ve got.”

Brown’s other Million runner Robert Bruce, back in an attempt to become the first horse to win the race two years in a row, finished fourth.

Asked if he’s ever won three Grade 1’s on the same day at one track, Brown said “I don’t believe so.”

Among his recent accomplishments are running 1-2-3 two times in New York, and he’s also won two Breeders’ Cup races in each of the last two years.

When all was said and done on Saturday, Brown’s numbers were quite impressive: In just over two hours, he sent out 11 horses in five races at two tracks and they collected more than $1.6 million in purse money – topped, of course, by the Million winner’s share of $582,000 (Trainers usually receive 10 per cent of earnings, so that would mean Brown’s take amountedto around $160,000).

“It was a great moment,’’ said Brown of his day. “My oldest daughter Ava came with me yesterday, so it was a great day for us and I’m so happy she was able to be a part of an historic day. There’s a sense of relief, because me and my team put in a lot of time — months — preparing for it, and I’m just so proud of everyone on my team, and of course the horses, for how well it was executed.”

In a pair of 2-year-old races on Saturday, Green Light Go made a winning go of it in the $200,000 Saratoga Special (G2) despite some drifting issues in the stretch under Junior Alvarado, and Collusion Illusion hung on for a 1 ¼-length upset in the $200,000 Best Pal (G2) at Del Mar.

Owned by Stronach Stables, Green Light Go ($5.10), now 2-for-2, is a son of Hard Spun trained by Jimmy Jerkens. The trainer said the bay colt’s next start could be the Hopeful (G1) at Saratoga on  Sept. 2 or more likely the Champagne (G1) at Belmont on Oct. 5

Collusion Illusion ($17.40), ridden by Joe Talamo, is trained by Mark Glatt, who said he’ll consider the Del Mar Futurity (G1) on Sept. 2 as a possible next start for his now 2-for-2 colt.