They’ve been racing at Saratoga since 1863, and thanks to COVID-19, there’s never been a stranger vibe surrounding the world’s best extended meeting.

They’ll be running the 6-furlong Schuylerville for 2-year-old fillies, but besides that traditional opening-day stakes, nothing feels normal. For many years, Thursday’s co-feature, the 1 1/8-mile Peter Pan Stakes, served as a prep for the 1½-mile Belmont Stakes, which was run last month at 1 1/8 miles.

This time the Peter Pan is offering qualifying points (40-20-10-5 from first to fourth) for the Kentucky Derby, which will be staged four months later than usual. 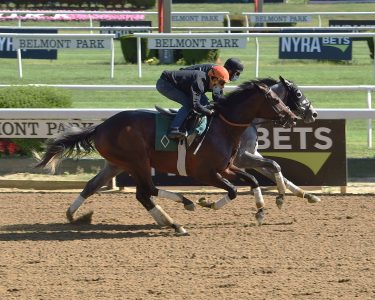 Even with nobody in the ancient wooden grandstand, it will be business as usual pari-mutuelly. If you’re playing from the couch, you’ll be focused on finding winners, not lamenting the deserted seats.

Let’s see if we can make some money on the stakes that head a card that’s not particularly appetizing. I’ll wait for another day to put together a pick 3 or pick 4 ticket. There will be plenty of opportunities.

Only one of the eight 2-year-old fillies has run more than once – Hara (twice) – and each is coming off a win. Talk about uncertainty and lack of information, which won’t keep Beautiful Memories (3) from being odds-on off a 10-length runaway at 5 furlongs. She led throughout, and there’s other speed in here, so maybe she’ll get tired and burn money at 3-5. Or she’ll win by daylight under wraps and be anointed the next Rachel Alexandra.

“You always want to see more than just one time,” trainer Mark Casse said. “It was not a shock to see her run the way she did last out. We’re hoping for a similar performance, but we’ll let her do the talking.”

I won’t be taking a short price on Beautiful Memories, who on paper is the most likely winner. Sunny Isle Beach (4) and Queen Arella (5) produced much lower speed figures. Each, however, showed a dimension that 2-year-old first-timers rarely display: the ability to rally from fifth early and win.

As Sunny Isle Beach’s trainer, Wesley Ward, said: “If there’s a strong pace up front, then here we come.”

I’ll put a few dollars to win on both Sunny Isle Beach and Queen Arella and use them in a three-horse exacta box with Beautiful Memories. As for doubles, play those three with Mystic Guide (6) and Country Grammer (2) in the Peter Pan.

Off his superior company lines, Belmont Stakes also-ran Modernist (3) is the probable favorite, but I’m against him. He’s won twice at the distance, but Modernist’s problem is he’s a need-to-lead type who’s not that fast. There’s enough early speed (Mo Hawk, Celtic Striker, Caracaro) to take him out of his game, and I’m more interested in closers Mystic Guide (6) and Country Grammer (2).

(Before you wonder if I’m nuts to ignore Celtic Striker off a 19-length runaway, that turned into a two-horse race after a scratch at the gate. He got the early lead, and that was that, because front-runners win 90 percent of match races.)

I prefer Mystic Guide, whose pedigree (Ghostzapper out of an A.P. Indy mare) appears ideally suited to 9 furlongs around two turns. He beat Country Grammer by 1½ lengths last time when they finished second and third behind Tap It to Win, who freaked before bouncing in the Belmont.

I’ll play Mystic Guide to win and place and box him in exactas with Country Grammer.