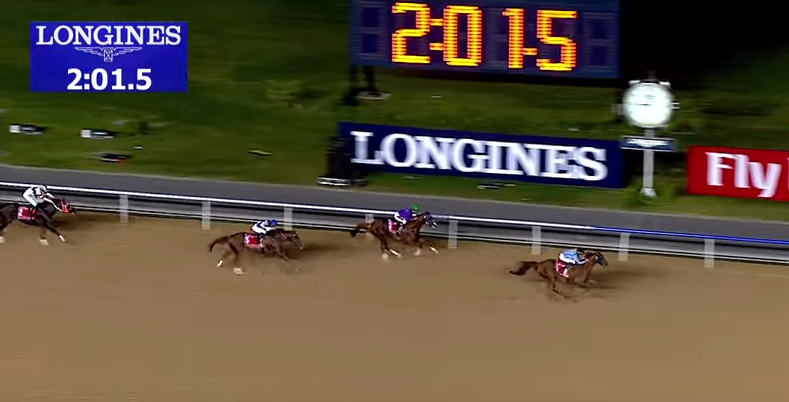 California Chrome looks to avenge his loss in the 2015 Dubai World Cup, in which he finished second to Prince Bishop.

Since the first running of the Dubai World Cup and Cigar’s victory in 1996, some really talented American-based horses have taken their best shot in the great “Duel in the Desert.” This year is no different, as five American runners, led by 2014 Horse of the Year California Chrome, will attempt to shine under the lights at Meydan Racecourse in Dubai and earn the winner’s share of the rich $10 million purse.

The rain from earlier in the week in Dubai seems to have cleared the area and the weather has cooled a bit. The evening low temperature will be in the upper 60s and dry, so expect a fast track for the big race.

Last year, 2014’s Kentucky Derby (GI) and Preakness Stakes (GI) winner California Chrome was the world’s most famous horse heading into the Dubai World Cup, but was wrapped in a storm of controversy involving his owners and what his 2015 campaign would look like. The Art Sherman-trained colt only prepped once in the three months before shipping to Dubai — finishing second to champion Shared Belief in the San Antonio Handicap (GII) at Santa Anita — but still produced a strong second-place finish to Prince Bishop in the World Cup.

After the Word Cup, California Chrome switched trainers ever so briefly and was sent to England for a start at Royal Ascot, but a subsequent cannon bone bruise kept him out of his highly anticipated start and the flashy colt was sent to the sidelines for the rest of last year. Though retirement chatter hovered over his head for much of last summer, a bit of an ownership shakeup altered the colt’s future forever and the decision was made to run him one more year by his new connections.

He returned to Sherman’s California base in September always with an eye on Dubai. 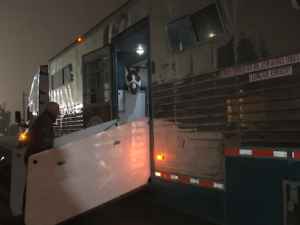 California Chrome on his way to Dubai.

This year, California Chrome’s preparations for the World Cup have been dramatically different than last year. After winning the San Pasqual Stakes (GII) at Santa Anita in early January, he shipped to Meydan to tighten up and prep, impressively winning the Trans Gulf Electromechanical Trophy Stakes a month ago as his solid prep for Saturday. In 2008, Curlin shipped to Dubai early and raced over the track as preps for the Dubai World Cup, something Sherman clearly took notice of.

California Chrome drew post 11 out of 12 in the 2,000-meter (about 1 ¼ miles) test, which could be a concern for a frontrunning/early speed type like him, but at Meydan there’s a good run into the first turn and he’ll also have less of a chance for traffic or bumping out of the gate. Victor Espinoza, who has been aboard the son of Lucky Pulpit for all of his biggest and highest pressure-filled starts, will be back in the saddle and nobody is more confident of a victory than he is.

Frosted is best known as a really good horse who quite possibly contributed to Triple Crown winner American Pharoah’s defeat in the Travers Stakes (GI) last summer. Regardless of what side of the fence you fall on regarding that controversy, there’s so much more to the well-bred son of Tapit, including a track record-setting performance last out in his Meydan debut, round 2 of the Maktoum Challenge (GII) at the Dubai World Cup distance.

Independent of the Triple Crown winner, he was an amazing three-year-old last year, winning the Wood Memorial (GI) before finishing a fast-closing fourth in the Kentucky Derby. He also romped in the Pennsylvania Derby (GII) before an off-the-board performance in the Breeders’ Cup Classic (GI), but it was a long year for Frosted and he got a nice winter freshening before returning with his record-setting performance in his final World Cup prep.

He’s a “house horse” in that he’s owned by Godolphin, but he’s actually all American, as he was bred in Kentucky and is trained by Kentucky native Kiaran McLaughlin, who won the World Cup in 2007 with Invasor. He’s also got a good draw, breaking from the nine-hole, and owns a versatile running style to accommodate whatever pace sets up in front of him.

Grade I winner Hoppertunity, who won the San Antonio Stakes (GII) last out for his first victory in more than a year, had the unfortunate situation of racing in the shadow of a Triple Crown-winning stablemate in 2015. And while he hasn’t racked up a bunch of wins in his 18-race career, he always runs well and hasn’t finished worse than fourth since his debut more than two years ago. Trainer Bob Baffert is a seasoned Dubai World Cup-winning trainer (Silver Charm in 1998 and Captain Steve in 2001) and would not send a horse halfway around the world unless he felt there was a good shot at victory. Hoppertunity is another American who likes the stalk the frontrunners and who will break from the outside in the 12-runner race. As consistent as he is, it’s easy to expect a strong performance from the son of Any Given Saturday under jockey Flavien Prat.

Keen Ice is probably best known as the runner to have defeated American Pharoah in last year’s Travers. Unfortunately, after that win, his connections had high hopes for him and he has been unable to deliver thus far, failing to reach the winner’s circle in three subsequent starts. Now, back in his toughest test in Dubai, the son of 2008 World Cup winner Curlin will wear blinkers for the first time, something that can only help him as he’ll break from the innermost post position.

Trainer Dale Romans, who tightened the girth on 2005 World Cup winner Roses in May, has never added blinkers to a horse before a graded stakes race, but after the colt finished well back in his prep last out, the third round of the Al Maktoum Challenge (GI), jockey Ryan Moore suggested the added equipment could only help. And after a nice five-furlong breeze in :59 1/5 over the surface wearing the headgear, he will again wear them on Saturday.

Mshawish won the Donn Handicap (GI) last out and will attempt to be the first Dubai World Cup winner for trainer Todd Pletcher. He’s a versatile sort, having switched to dirt after a pretty solid turf career and is absolutely bred to like the World Cup distance. Three-time winner Frankie Dettori has accepted the mount for the Al Shaqab Racing colorbearer, something that can only help the four-year-old’s chances.

Candy Boy has been away from action since his fourth-place finish in this race a year ago. Once a promising hopeful along the 2014 Triple Crown trail and the winner of the Bob Lewis Stakes (GII), he has a big task in proving he’ll be fit enough to run with this field off the long layoff.

Mubtaahij won last year’s UAE Derby (GI) before faltering on the American Triple Crown trail, but is back on his favored surface and will be making his third start off a long layoff.

Group 2 winner Vadamos makes his second start this year after a second on the all-weather track at Chantilly last out. Andre Fabre trains the son of Monsun, which automatically demands a long look, but he may be better suited to the turf, which seems to be his preferred surface.

The Japanese, who won in 2011 with Victorie Pisa, send Hokko Tarumae this year. The King Kamehameha horse has made $10 million from 17 wins in 35 career starts in his home country and is looking to better his fifth-place finish from a year ago.

Local runners Special Fighter and Gun Pit return off their first- and second-place finishes, respectively, in round three of the Maktoum Challenge (GI) last out but will face the toughest field of their careers to date.