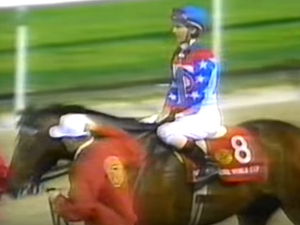 Cigar after winning the inaugural Dubai World Cup in 1996.

It’s been 20 years since Dubai Vice President and Prime Minister Sheikh Mohammed bin Rashid al Maktoum and his family announced they’d be hosting a $4 million race set at the classic distance of 1 ¼ miles to be held the last week of March at their little known racetrack named Nad Al Sheba located in an little known Emirate nobody knew a lot about… yet.

The concept was simple: The world’s richest horse race hosted by a very rich country and a rich family that breeds more thoroughbreds around the world than any other. The top horses in the handicap divisions in just about every country with upper tier racing would be invited send their best to settle who’s best.

So, in early 1996, the best runners from around the world were invited to the inaugural Dubai World Cup and an astoundingly talented field from all parts of the globe showed up. Riding a 13-race win streak, reigning Horse of the Year (and probably the best horse in the word) Cigar skipped his planned start in the Santa Anita Handicap (GI) and instantly became the marquee attraction for the first Dubai World Cup. The Maktoum family couldn’t have planned it better.

And along with the invitations came all-expenses-paid first-class trips for each horse and all of the connections. Soon after Bill Mott committed Cigar to run, other international stars followed suit — Richard Mandella would send grade 1 winner Soul of the Matter and H. James Bond packed up L’Carriere and shipped him from America to Dubai. Geoffrey Wragg and Clive Brittain sent top runners Tamayaz and Needle Gun in from Europe while the bulk of the field was loaded with the best Maktoum-owned horses racing around the world, all wearing the Godolphin blue and representing the home team.

Back in the U.S., American racing fans and handicappers wondered how they’d be able to watch the race, let alone wager on it. Due to strict Muslim law, gambling was and still is illegal in Dubai. And horses would run medication-free, meaning the Americans who’d relied on Lasix could be in for some trouble. Also, due to the heat in Dubai, the races would be run at night, under the lights. Hardly any tracks raced under lights in the United States anymore.

It was both confusing and exciting all at once.

It’s hard to imagine now, but 1996 was an era long before online wagering; before phone wagering; before Twitter and Facebook and Instagram. We actually had to wait an entire day to buy our Daily Racing Form a day before the races, and everyone eagerly anticipated the weekly deliveries of the BloodHorse and Thoroughbred Times to get our past performances, news, race previews and recaps. We literally had no idea what was going on in Dubai as the horses prepped for the biggest payday in racing.

But we were still obsessed.

New York ended up being the wagering hub and about 500 off-track betting locations carried the race as part of a single pool linking more than 500 outlets in the United States. And with only an “about” post time, fans flocked to their local OTB or racetrack to see the race, as well as find out what it was really all about. The pre-race chatter at the Red Mile in Lexington, where I watched with my friends quieted as fans huddled under the tube televisions, watching the horses warm up under the Nad Al Sheba lights.

The crowd turned silent as the horses loaded into the gate for that first Dubai World Cup, but as Cigar and jockey Jerry Bailey stormed down the lane the cheers around me grew deafening and drowned out the announcer. All we knew was Cigar was the winner and an American connection traveled nearly 7,000 miles to prove he was the best in the world.

The best part? When the next week’s Thoroughbred Times arrived, the cover featured a photo of Cigar in triumph, as well as one of a group of folks huddled under a tiny television at the Red Mile. And who was right in the middle? Yep, me.

Since that first Dubai World Cup 20 years ago, an ultra-modern racetrack named Meydan was built to host the event and the old Nad Al Sheba was closed and demolished. This year’s $10 million purse remains the richest in the world, but has grown over the years to compete with the purses of feature races in different countries. And although the “home team” has had the most success, sending out six winners overall, American horses have still shown their ability to ship and win — Silver Charm, Captain Steve, Pleasantly Perfect, Invasor, Curlin and Well Armed all took home top honors.

This year six of the 12 runners are American-based — Candy Boy, Mshawish, Keen Ice, Hoppertunity, Frosted and California Chrome have made the trek to the desert. Now we can watch the race on our computers, on TV or at the track. We can bet by phone, online or at most racing facilities and OTBs open for business on Saturday. We know what each horse is doing at the moment he does it, thanks to Twitter, Facebook, Instagram and this thing that connects us all, a little invention we call the Internet.

Information flows freely and easily now from the Middle East and as much as I love it, I will always be nostalgic for that first one when we all had no earthly idea as to what was happening,  yet Cigar showed the world what he was made of.