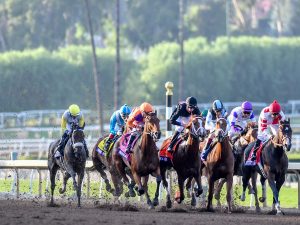 Let’s make this week’s edition of Top 10 Derby contenders from usracing.com/news a short one.

Because as we know, the 146th running of the Kentucky Derby is likely to be rescheduled from its traditional first Saturday in May to a later date, or eventually canceled, due to health and safety concerns regarding the coronavirus pandemic.

Already, Churchill Downs officials have said the Derby would not be run without spectators (already happening at most racetracks), and with less than seven weeks before May 2, the postponement of the race could come at any time.

We’ll move on, though. Nadal displayed some fighting spirit in winning the Rebel Stakes (G2) at Oaklawn Park on Saturday, holding off a late charge from 82-1 long shot Excession to win by three-quarters of a length.

That gives Hall of Fame trainer Bob Baffert three unbeaten 3-year-olds, and as many as seven Derby contenders. A big if, though.

Nadal, 3-for-3 with 50 Derby qualifying points to move into third-place on the leaderboard, is back in California, where the wait is on to see what’s next. The son of Blame moved from No. 8 to No. 5 before the Louisiana Derby based on eye-catching workouts, and he’s at No. 3 this week, behind new No. 1 Tiz the Law and stablemate Authentic (3-for-2).

Tiz the Law, winner of the Holy Bull (G3) for trainer Barclay Tagg, put in a solid 6-furlong workout at Palm Meadows on Sunday and looks sharp heading into the Florida Derby (G1) at Gulfstream Park on March 28.

“He worked beautifully,” Jack Knowlton, managing partner of Sackatoga Stable, said. “I was up there and it was a good, strong work. One more to go.”

A word or two about Silver Prospector, who tumbles from No. 1 to No. 10 after finishing sixth of eight in the Rebel following a tough trip with Ricardo Santana, Jr. aboard. Squeezed between horses in fourth place in the stretch, the colt was bothered when Excession steered out with a furlong to and lost all chance. In winning the Southwest (G3) last month, Silver Prospector had a perfect trip.

Won San Felipe gate-to-wire, dusting off three other Derby prospects … Is this the one who gives Baffert record-tying No. 6 Derby win? … 3-for-3 and likely staying home for final prep … No. 1 on points leaderboard (60) … Next start: Santa Anita Derby, Santa Anita, April 4 … Derby Future Wager Odds: 6-1.

Now 3-for-3 and Derby qualified after Rebel win … imposing son of Blame already being compared with Justify at same stage of career … No. 3 on points leaderboard (No. 3) … Next start: TBD … Derby Future Wager Odds: 10-1.

Showdown with Tiz the Law still on, although there will be no spectators, as with most tracks … Runner-up in Holy Bull and winner of Fountain of Youth by 8 ½ lengths … No. 2 on points leaderboard (54) … Next start: Florida Derby, Gulfstream, March 28 … Derby Future Wager Odds: 16-1.

Another solid workout at Fair Grounds, going 4 furlongs in 48.40 (16th of 88 at the distance) … Lecomte winner, and runner-up in first division of Risen Star behind Mr Monomoy (off Derby trail) … No. 7 on points leaderboard (33) … Next start: Louisiana Derby, Fair Grounds, Saturday … Derby Future Wager Odds: 23-1.

Why not? Winning an allowance optional claiming race at Santa Anita is a far cry from the Derby, but highly-touted colt lived up to expectations with a 10 ¼-length win at a mile … Of course, this son of Speightstown still needs qualifying points (2-for-2) with a Derby prep in the plans … Owned by Starlight Racing, SF Racing, Madaket Stables, Stonestreet Stables, Frederick Hertrich, III, John D. Fielding and Golconda Stables … Purchased for $700,000 … Next start: TBD … Derby Future Wager Odds: 12-1.

Looking like he might be up for the challenge entering the stretch of the Rebel, Silver Prospector was knocked off his game by an 82-1 long shot, and wound up sixth … Experienced colt showed with a clear ride, he can be a winner, but this didn’t work out … Still have hope he can rebound in the Arkansas Derby …. Career record of 9-3-0-2 far from stellar .. No. 12 on points leaderboard (21) … Next start: Arkansas Derby, Oaklawn Park, April 11 … Derby Future Wager Odds: 24-1