Prairie Meadows Serves Up A Trio of Friday Night Stakes

The biggest day of the racing season in Iowa kicks off a Fourth of July weekend loaded with stakes races up and down the East Coast, from New York to Maryland to Florida.

Not bad for a track that receives little national notoriety.

Ricardo Santana, Jr., has the ride aboard Super Stock leaving from post 2. Nova Rags, second in the Peter Pan (G3) and third in the Woody Stephens (G1) in his two previous starts, will be ridden by Junior Alvarado.

Super Stock was 16th of 19 in the Kentucky Derby (G1), and most recently finished fourth after a troubled trip (Get Her Number clipped his heels) in the Texas Derby over a sloppy track at Lone Star on May 31.

A field of seven fillies was entered for the 1 1/16-mile race with Pauline’s Pearl the 2-1 favorite for Hall of Fame trainer Steve Asmussen. Ricardo Santana, Jr., has the call leaving from post 2. Army Wife is 5-2 with Joel Rosario in the irons.

In her only start of 2021, Pauline’s Pearl finished eighth in the Kentucky Oaks (G1). Army Wife, trained by Michael Maker, won the Black-Eyed Susan (G2) at Pimlico on May 14.

Knicks Go, the even-money favorite, is back for another go at reaching the winner’s circle for trainer Brad Cox. The 5-year-old gray won the Pegasus World Cup Invitational (G1) to start off 2021, but ran fourth in his two subsequent starts, in the Saudi Cup (G1) and as the strong favorite in the Metropolitan Mile (G1).

The Cornhusker is around two turns at 1 1/16 miles. Joel Rosario has the mount leaving from post 5. 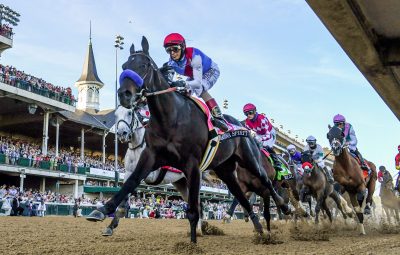 Hall of Fame trainer Bob Baffert, who trains Medina Spirit, is currently suspended from entering horses at New York’s tracks (Aqueduct, Belmont and Saratoga) as well as Churchill Downs. For now, he is planning to run Medina Spirit in the Haskell, a race the trainer has won a record nine times.

Rombauer, trained by Michael McCarthy, was third in the Derby before his win at 11-1 in the Preakness.

Mandaloun, second in the Derby but could be declared the winner after the ruling on Medina Spirit, is also nominated to the Haskell, along with Preakness runner-up Midnight Bourbon and Belmont Stakes runner-up Hot Rod Charlie.

Mandaloun prepped for the Haskell with a win in the Pegasus Stakes on July 13.

Around the tracks: Hall of Fame trainer Todd Pletcher will keep his star fillies apart for now, with unbeaten Malathaat targeting the Coaching Club American Oaks (G1) on July 24 at Saratoga, and Mother Goose (G2) winner Zaajel prepping for the Test (G1) on Aug. 7 at the Spa … The New Mexico Horsemen’s Association filed suit against the New Mexico Racing Commission in federal court earlier this week, charging the regulatory body with depriving racehorse owners and trainers of their civil rights and other violations … The Keeneland fall meet (Oct. 8-30) will off er a record $6 million in stakes purses and an expanded stakes schedule of 22 races. The meet covers 17 racing dates, which includes 10 Breeders’ Cup “Win and You’re In” races.