We owe a debt of gratitude to Florida, Arkansas and the other states that proved racing could be safely conducted in the midst of the coronavirus pandemic. 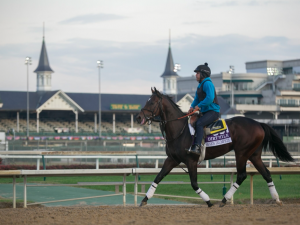 Thanks to their fortitude and trailblazing protocols, other jurisdictions have loosened the clamps and are allowing the sport to resume, albeit without a live audience.

Churchill Downs was among the dormant tracks that have sprung back to life. The impact of the CD shutdown rippled through the entire industry with the most dramatic development the unprecedented rescheduling of the Kentucky Derby (G1) from the first Saturday in May to Labor Day weekend.

The fallout from that shift reordered the stakes calendars for 3-year-olds. The Preakness (G1) now concludes the Triple Crown in October. The New York Racing Association announced several days ago that the Belmont Stakes (G1), minus fans, will be contested on June 20 with the distance trimmed from the traditional 1 1/2 miles to a slimmed-down nine furlongs.

Consider the $150,000 Matt Winn Stakes (G3) on Saturday at Churchill. From one perspective, it marks the resumption of the Derby qualifiers, offering 85 points with 50 going to the winner. That is a nice cache of points, and will stamp the victor as a Derby contender with winning form over the track.

Fair enough, but perhaps this race is more meaningfully viewed as a Belmont prep as this year’s road to the Derby takes unusual detours.

The Matt Winn attracted 12 runners for the 1 1/16-mile contest including several with stakes seasoning.

Maxfield, unbeaten in two starts, is the logical headliner and slight 5-2 morning-line favorite. The Godolphin homebred debuted last September with a rallying victory at Churchill and followed with a dominant score in the Breeders’ Futurity (G1) at Keeneland.

He never made it to the Breeders’ Cup Juvenile (G1) due to a right front leg issue and now makes a belated 3-year-old debut for trainer Brendan Walsh.

“We never questioned what he was like mentally but you can tell when we got him back to training that he’s filled out physically,” Walsh said.

There are several concerns here from a handicapper’s perspective. The layoff from October to May is extensive and this race is clearly not the long-term goal.

Then there is the matter of running style. In both wins, Maxfield broke slowly and prevailed on sheer talent. The son of Derby winner Street Sense will find it tougher as you get older to spot the competition 8-to-10 lengths at the start.

Looking to correct that flaw, Walsh worked Maxfield from the gate on May 10 with regular pilot Jose Ortiz aboard. The colt responded with a “bullet” drill, zipping 5 furlongs in 59.20 seconds.

If he breaks alertly in the Matt Winn, Maxfield will be tough to beat.

This might be the stakes where Ny Traffic (10-1) finally earns some respect from the bettors after a productive Fair Grounds campaign.

He contested the pace in a division of the Risen Star (G2) and held on for third at 11-1. The next step was the Louisiana Derby (G2) where he was a game second at 26-1 behind the pacesetting Wells Bayou.

That ability to stalk or set the pace potentially gives Ny Traffic a tactical advantage over Maxfield. And he should appreciate the cutback in distance following 1 3/16 miles in the Louisiana Derby.

Ny Traffic is trained by Florida-based Saffie Joseph Jr. who is one of the rising stars in the sport.

Major Fed (5-1) faced Ny Traffic twice at the Fair Grounds, finishing second in the same Risen Star division before closing to get fourth in the Louisiana Derby.