Vekoma, the 3-1 morning-line favorite for the Breeders’ Cup Sprint (G1), spiked a fever and is out of the race, trainer George Weaver said.

The announcement came Wednesday morning, and was first reported by drf.com. Weaver said his 4-year-old colt was treated by a veterinarian. 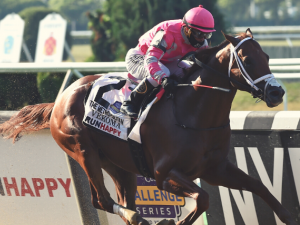 “Vekoma did not train [Wednesday]. He spiked a fever last night. He got treated,” Weaver said. “He’s good. We treated him. He’s comfortable, stable and happy.”

Vekoma was coming into the Sprint with a 3-0 record in 2020, including victories in Carter Handicap (G1) and the Metropolitan Mile (G1) in his previous two starts. He was shipped to Keeneland earlier this week from New York, where he was training at Saratoga.

Spendthrift Farm owns the breeding rights to Vekoma, who is scheduled to be retired beginning in 2021.

Without Vekoma, who drew the No. 13 post for the 6-furlong Sprint, the likely favorites are C Z Rocket and Yaupon. It also allows Lasting Legacy, the only also-eligible to get into the 14-horse field.

Hall of Famer Bob Baffert is the most recognizable face in racing, and he’s always been among the lead promoters of the sport that has brought him fame and fortune.

In 2020, the year of the COVID-19 pandemic that rearranged the sports calendar, Baffert had perhaps the most dizzying time of anyone in the industry.

He had so many 3-year-old Kentucky Derby contenders, he could hardly figure out where to run which horse. Then came medication issues, with his star filly Gamine, and with undefeated Derby contender Charlatan, and with Gamine again, and even with his 2018 Triple Crown winner Justify. 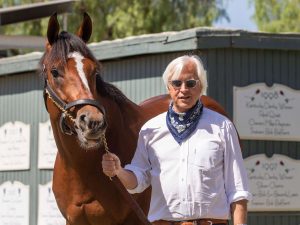 Baffert also inherited 2019 3-year-old champion Maximum Security in 2020, and the 4-year-old joins two other Baffert horses as top contenders in the $6 million Classic on Saturday. Improbable is the 3-1 favorite; Maximum Security is 7-2; and his Derby winner Authentic is 6-1.

On Wednesday, Baffert released a statement addressing the issues.

“2020 has been a difficult year for everyone. It has been no exception for my family, my barn, and me. I am very aware of the several incidents this year concerning my horses and the impact it has had on my family, horse racing, and me.

“I want to have a positive influence on the sport of horse racing. Horses have been my life and I owe everything to them and the tremendous sport in which I have been so fortunate to be involved.

“We can always do better and that is my goal. Given what has transpired this year, I intend to do everything possible to ensure I receive no further medication complaints.”

In the release, he said he’s making moves to “do better.”

He said he’s hiring Dr. Michael Hore of the Hagyard Equine Medical Institute “to add an additional layer of protection to ensure the well-being of horses in my care and rule compliance.”

He’s also “increasing the training and awareness” of his employees to follow proper protocols, and said he’ll become more involved with the day-to-day operation.

“I want to raise the bar and set the standard for equine safety and rule compliance going forward,’’ he said in the release. “For those of you that have been upset over the incidents of this past year, I share in your disappointment. I humbly vow to do everything within my power to do better. I want my legacy to be one of making every effort to do right by the horse and the sport.”

Going for four in a row, 2-year-old colt Gretzky the Great is 8-1 on the morning-line in the one-mile Breeders’ Cup Juvenile Turf (G1).

The field is a full one with 14 starters, Mutassabeq the 5-1 favorite.

It’s much easier to say the name of the 8-1 shot, so why not put down a few bucks on a colt named for hockey great Wayne Gretzky?

A son of 2016 Kentucky Derby winner Nyquist (named for hockey player Gustav Nyquist), Gretzky the Great comes into Friday’s race off a victory in the Summer at Woodbine on Sept. 20. He’s trained by Mark Casse.

Unsold on a final bid of $295,000 at the 2019 Fasig-Tipton Kentucky October yearling sale, he was purchased privately by Eclipse Thoroughbred Partners and Gary Barber.