Will she or won’t she?

Neither owner nor trainer knows for sure … yet. 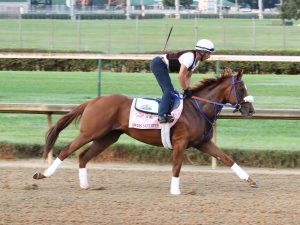 Decision day looms on whether the Preakness-winning filly Swiss Skydiver will run against the boys in the $6 million Breeders’ Cup Classic or go in the $2 million BC Distaff instead – both races are scheduled for Nov. 7 at Keeneland.

With Swiss Skydiver training well at Churchill Downs since her Preakness victory on Oct. 3, owner Peter Callahan and trainer Ken McPeek are discussing their options as they watch the filly progress. Her first workout since the Preakness is scheduled for Saturday (Oct. 17), so we can expect an update over the weekend.

At one point, Callahan mentioned he prefers the 1 1/8-mile Distaff for fillies and mares, 3 and up, a race in which Swiss Skydiver would take on probable favorite, 5-year-old Monomoy Girl. At another point, McPeek noted that Swiss Skydiver may prefer the 1 ¼-mile distance of the Classic – she won the 1 ¼-mile Alabama (G1) for 3-year-old fillies at Saratoga easily by 3 ½ lengths. Callahan has said he thinks the Classic might be “too ambitious” for his filly.

The Breeders’ Cup schedule calls for pre-entries to be taken by Oct. 26, and the plan is to pre-enter Swiss Skydiver for both races. Entries are taken Nov. 2, and Kentucky racing rules say horses can only be entered in one race on the same day.

Which means a decision must be reached five days before the races, and before the fields are determined. I’m thinking Distaff, but hoping for a Classic verdict.

But we’ll have to wait. For now, the final BC Classic rankings are out and Swiss Skydiver is No. 7 in the weekly poll (since July 21) determined by a panel of racing media, horseplayers and members of the Breeders’ Cup Racing Directors/Secretaries Panel.

McPeek won’t balk at the challenge of winning the Classic. Swiss Skydiver won the Preakness at 11-1; and Sarava won the 2002 Belmont at record odds of 70-1.

While he’s won two of the three Triple Crown races, McPeek is 0-for-31 in Breeders’ Cup races, which includes six runner-up finishes. Swiss Skydiver would be his first Classic starter.

Since the Breeders’ Cup began in 1984, only one female – the Hall of Fame mare Zenyatta has won the Classic. As a 5-year-old Zenyatta won the 2009 Classic; in the 2010 Classic in a bid for a perfect 20-0 record, she suffered her only loss, by a neck to Blame.

Swiss Skydiver has a formidable resume of 11-6-3-1 for earnings of nearly $1.8 million. She is 5-for-9 in this year of the coronavirus pandemic, somehow able to keep racing throughout 2020 in seven states at nine different tracks.

A Classic run would be intriguing, trying to beat Improbable – winner of three straight Grade 1’s, most recently the Awesome Again; Authentic for a second time after defeating him in the Preakness; and star-crossed Maximum Security, a first-place finisher in 11 of 13 career starts, including the 2019 Derby (he was DQ’d to 17th for interference). “Max” was second to Improbable in the Awesome Again.

Tiz the Law, the leading 3-year-old before finishing second in the Derby, also is training well for the Classic. The colt posted a 5-furlong work in 1:01.54 at Belmont on Oct. 10.

Other Classic contenders include 4-year-old By My Standards (4-for-6 in 2020); 3-year-old Happy Saver (Jockey Club Gold Cup winner); and Global Campaign (Woodward winner).

The addition of a filly to this field would make it a Classic to remember in a year we’d all like to forget.

The $31 million Breeders’ Cup runs two days, Nov. 6-7 with a total of 14 races, five on Friday and nine of Saturday. The races will be televised by the NBC Sports Group.