The ‘Mad Genius’ Returns to Woodbine for E.P. Taylor Stakes

Racing is always more fun and infinitely more interesting when Michael Dickinson, the “Mad Genius” is back in action.

Dickinson, a man of unshakeable conviction and strong opinion, is well positioned to saddle his first Grade 1 winner since Tapit in the 2004 Wood Memorial when he sends out Theodora B. on Sunday in the $600,000 E.P. Taylor Stakes for fillies and mares going 1 1/4 miles at Woodbine. 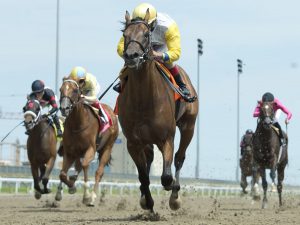 Theodora B. will be only the eighth starter of 2020 for Dickinson. He has three wins, all with this 5-year-old mare.

Dickinson is best known for the amazing training feat of bringing Da Hoss back from an almost two-year layoff to win the 1998 Breeders’ Cup Mile (G1) with only a single allowance race as a tune-up.

A three-time champion trainer in England, Dickinson sought a new world to conquer and headed to the United States in 1987.

Dissatisfied with the condition of U.S. racetracks and training facilities, Dickinson built his own European-style “training yard,” Tapeta Farm in North East, Maryland that he modestly promotes as the “Chantilly of the Chesapeake.”

Dissatisfied with the inconsistent quality of American dirt surfaces, Dickinson invented his own all-weather product: Tapeta which is the main track at Woodbine, Presque Isle Downs and Golden Gate Fields.

Dissatisfied with racing in general and wishing to spend more time developing and improving his synthetic surface, Dickinson stopped training from 2008-2015.

He returned in 2016 with a lower-profile yet successful stable. In 2019, he won 14 races from only 48 starters, an impressive 29 percent success ratio.

Theodora B., an Augustin Stable homebred, has won consecutive stakes with her frontrunning style. She has already established herself as a horse for this course with an 11-1 upset score in the Dance Smartly (G2) in mid-August.

Theodora B. employed the same pacesetting tactics one month later to take the TVG Stakes at Kentucky Downs.

Justin Stein, her rider in the Dance Smartly, will be back aboard.

Etoile is back for another shot at Theodora B. She sat second to the leader in the Dance Smartly and finished in that position as the 7-5 favorite. Rafael Hernandez rides for trainer Chad Brown.

Rideforthecause will look to sweep to victory from well off the pace as she did in the Canadian Stakes (G2) here last month.

The boys get a chance to shine in the Northern Dancer. Interestingly, none of the eight runners owns a victory at this 1 ½-mile marathon distance.

Count Again, a Sam-Son Farm homebred trained by Gail Cox, looks well suited to handle added distance. The 5-year-old has come into his own this meet since stretching out to 1 1/4 miles. He circled the field to comfortably win the Singspiel Stakes (G3) and now the 5-year-old gelding tackles 12 furlongs for the first time.

“It was exactly what he wanted to do, which is to go a distance” Cox said of the Singspiel. “A mile-and-a-sixteenth was always a little short for him. So with the added distance, he was really good.”

Sir Sahib does his best running late. Unfortunately, he usually arrives too late. He has hit the board in his last three outings, including the Singspiel most recently where he was second by 2 1/4 lengths.

Sir Sahib is the only returnee from last year’s Northern Dancer where he lost by 23 lengths.

Anybody up for a change of pace after those long-distance races? The third graded stakes of the day is the Nearctic at 6 furlongs.

City Boy, the 24-1 upset winner of this race last year, makes a repeat bid against some tough customers like Guildsman, Silent Poet and a trio from trainer Mark Casse: Blind Ambition, Olympic Runner and the filly Lady Grace.