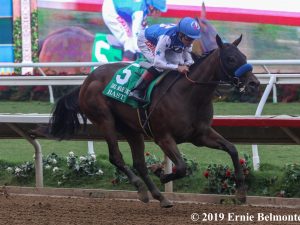 The Breeders’ Cup will certainly be the focus of the racing action on the opening weekend of the autumn race meeting at Santa Anita Park.  Among the five Breeders’ Cup Challenge “Win and You’re In” events scheduled are two set for opening day – the $300,000 American Pharoah Stakes (G1) for juvenile colts and geldings and the $300,000 Chandelier Stakes (G1) for juvenile fillies.

The Southern California weather has remained very warm, leftovers from the summer no doubt, but Saturday should be a bit cooler with highs reaching into the lower 70s. While rare rain is in the local forecast, there’s actually a chance for showers on Saturday morning. Not sure about accumulation, but it’s a good idea to be prepared for both fast and off conditions.

The first big event of the day is the Chandelier Stakes, now in its 51st year. Formerly known as the Oak Leaf Stakes before The Stronach Group took over the Oak Tree Racing Association’s fall dates in 2012, this race has traditionally been a showcase for some of the best fillies in history, let alone the West Coast.

Trainer Bob Baffert has saddled a record 10 winners, one more than fellow Hall of Famer D. Wayne Lukas, who hasn’t raced horses on the Southern California circuit regularly for almost two decades. Retired jockey Chris McCarron was aboard five winners over his illustrious career and Mike Smith trails with four winners so far in his Hall of Fame career.

Baoma Corporation’s undefeated Bast is the 3-5 favorite off her impressive Del Mar Debutante (G1) win and will get the services of Hall of Famer John Velazquez for the first time, substituting for Drayden Van Dyke, who has been injured and unsure of a return date, though he will be back riding Friday. This $550,000 daughter of Uncle Mo is one of several making her two-turn debut, but her pedigree suggests it shouldn’t be a problem, as does her nice mid-pack, off-the-pace running style.

KMN Racing’s California homebred Been Studying Her makes her first start for Jerry Hollendorfer assistant Dan Ward off a win in the state-bred Generous Portion Stakes last out. The two-time winning-daughter of Fast Anna has a similar off-the-pace running style as the favorite and is improving, her last being good enough to be competitive in open company. In this class jump and first start around two turns, she gets the services of Smith once again and certainly will like the pace in front of her.

In the two starts since EJR, Kenney and Barber’s Schuylerville Stakes (G3) winner Comical came back to California she’s had trouble being even competitive, let alone reaching the winner’s circle. Dismissed at 25-1 in the Del Mar Debutante last out, she finished third after a ton of trouble, though she was soundly defeated by nearly double digits. More distance should help her and she will carry hot jock Abel Cedillo, who picks up the mount on the daughter of Into Mischief for trainer Doug O’Neill.

Bloodstock agent Bob Feld went to $170,000 to secure K P Dreamin for Karl Pergola out of the April Ocala Breeders’ Sales 2-year-old in training sale six months ago and since then the daughter of Union Rags has raced twice for trainer Jeff Mullins, winning her last around two turns at a mile by 1 1/4 lengths from off the pace. This is certainly her acid test, but she has room to improve and has been training great in the month since her win. Ruben Fuentes rides.

Leucothea looked tremendous when breaking her maiden at Del Mar by 14 lengths at 5 ½ furlongs despite wearing a $62,500 price tag for Peter Miller, where she earned a huge BRISnet speed figure of 105, the highest for all runners here. It seemed the next logical step was stakes company, but she bombed in epic fashion in the Del Mar Debutante and finished a very disappointing last. Certain there was a good explanation for the poor performance, she’s back to try two turns and turn around her form to earn a stakes win. She has a lot to prove, but room to do it and there’s little doubt she’ll be heading right to the front from the break. Norberto Arroyo Jr. rides.

O’Neill, who has yet to saddle a winner in this race in his career, sends out maiden Buyer’s Remorse for Paul Reddam. He’s had success with maidens in winning graded stakes (Irap in the 2018 Blue Grass Stakes) but this one has her work cut out for her.

Post time for the Chandelier Stakes has been set at 3:10 p.m. PT.