A Lot to Like About Preservationist in Jockey Club Gold Cup

Vino Rosso … a mighty winner in California in the springtime; in this spot, I don’t think so.

Tacitus … beaten favorite the last three outings; will he once again fool us?

Code of Honor … sharp winner of the Travers; in truth, the competition at the Spa was wanner.

Having indulged me in this bit of doggerel, you have no doubt surmised that I am leaning toward Preservationist in the $750,000 Jockey Club Gold Cup (G1) on Saturday at Belmont Park.

The trees are starting to shed leaves in the Northeast and the remaining prep races for the Breeders’ Cup are down to a precious few.

Now comes one of the venerable events on the New York racing calendar. The JCGC was once a season-ending, championship-defining event in its own right.

Like most fall stakes everywhere, it has been eclipsed by the Breeders’ Cup and is now a way-stop on the journey to bigger and more lucrative events.

The latest edition drew only five entrants, yet another sign of the decline of dirt racing in North America. That could be fodder for future discourse, but suffice to say now that a healthy purse, a Grade 1 merit badge and an expenses paid trip to the BC Classic lured only four confirmed runners.

Olympic Village, claimed for $75,000 last time out at Saratoga, is cross entered in the $150,000 Ack Ack Stakes (G3) also on Saturday. If he turns up at Churchill Downs, that leaves four for the JCGC.

Looking at the field, Vino Rosso gets the only equipment change as trainer Todd Pletcher removes the blinkers that the 4-year-old has worn since last year’s Tampa Bay Derby (G2).

The Wood Memorial (G2) winner is no stranger to the big stage, finishing ninth in the Kentucky Derby (G1) and fourth in the Belmont Stakes (G1) during Justify’s 2018 Triple Crown sweep.

The most intriguing race on Vino Rosso’s resume was the game victory in late May in the Gold Cup (G1) at Santa Anita.

He returned from that with a third-place finish in the Whitney (G1) at the Spa. The equipment change and the spacing of the races suggests he will be a very potent force in the Classic with the Breeders’ Cup returning to Southern California.

Vino Rosso might still be a race away from peak form, with the bigger prize on the horizon.

Next we consider the pair of 3-year-olds in the field: Tacitus and Code of Honor. 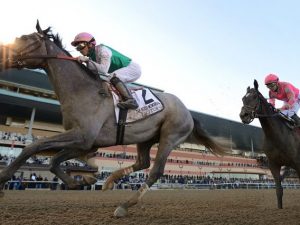 Tacitus was a live contender in the Derby, going off at 5-1. He fought gamely to get fourth in the slop before elevation to third when Maximum Security was taken down.

The next three outings — the Belmont, the Jim Dandy (G2) and the Travers (G1) —produced second-place finishes while burning a huge pile of bettor’s cash in the process.

Maybe this is the spot where the gray colt stands and delivers an overdue victory for Hall of Fame trainer Bill Mott, who seeks a fourth JCGC win.

While Tacitus again settled for second in the Travers, Code of Honor powered to a three-length score. He seems ideally suited to this 1 ¼ mile distance based on the Travers result and a third-place effort in the Derby.

He too benefited from Maximum Security’s Derby misfortune, getting second money in the revised order of finish.

The biggest knocks on Tacitus and Code of Honor are the hike to face older horses for the first time. The fact there only two, possibly three, veterans in the field aids their cause.

We have taken a winding road to reach Preservationist, a 6-year-old who has emerged this year a force in the New York handicap ranks under the patient guidance of Jimmy Jerkens.

A JCGC win would be a continuation of a family tradition. Allen Jerkens, Jimmy’s dad and legendary Hall of Fame “Giant Killer”, won this race three times: Prove Out (1973), Group Plan (1975) and Wagon Limit (1998). 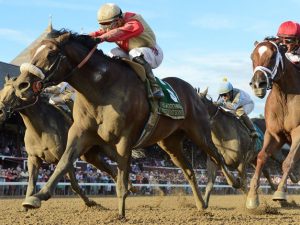 While there are no giants to slay in this field, Preservationist is building his own legend with recent victories in the Suburban (G2) and the Woodward (G1).

This will be only his 11th career start. He has spent more time on the shelf with injuries and ailments than he has in training.

Now healthy, Preservationist is finally flashing the latent talent that makes him the top contender in this race.

Sounder than his trainer, who is recuperating from recent hip surgery.

Jerkens is looking for his first JCGC win, having finished second with Wicked Strong (2015) and Effinex (2016).