At Last, the Perfect Race for Perfect Sting

After finishing second in major stakes races eight times this year, Perfect Sting had his day in the sun when he flexed his power to win the $600,000 Breeders Crown 3-Year-Old Pace at The Meadowlands on Oct. 31. 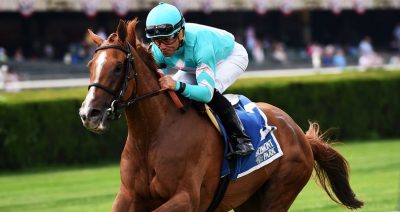 In 2020, he was the best 2-year old — pacer or trotter — going 10-for-10, including a dead-heat win in the Breeders Crown 2-Year-Old Pace. This year, no harness horse has been more consistent, but runner-up so many times can be frustrating. Fortunately, Perfect Sting didn’t have to answer questions about coming up short. And when Charlie May had the lead in the stretch it looked like Perfect Sting might finish second for the ninth time. It didn’t happen, and the win just may be enough to earn his Horse of the Year honors.

When the race was over, there was a long-awaited celebration for the son of Always B Miki. Trainer Joe Holloway called it something else.

“Relief. Relief that he finally showed up in the big race,” Holloway said. “We’d been consistent all year but hadn’t gotten the job done. We needed a signature win, and this was a pretty good way to do it.”

Let’s remember that Perfect Sting did have six wins coming into the Breeders Crown, but those were in minor stakes. He had finished second in most of the big ones and in agonizing fashion. Those runner-up finishes came in the Cane Pace, the Little Brown Jug, the Meadowlands Pace, the Pepsi North America Cup and the Tattersalls Pace.

Holloway summed up those photo finishes: “Six feet from greatness,” he said. “He’s been the most consistent and he’s made the most money, but we needed this win.”

Driver David Miller echoed the sentiments of many in harness racing.

“All year long, he’s been the bridesmaid and it’s nice to see him win a big race, it’s very gratifying,” Miller said. “A few of the losses have been heartbreaking. I’m so proud of him, so happy.”

He also became the first male pacer to win Breeders Crown trophies at age 2 and 3 since Artiscape did it in 1987 and 1988.

The win also earned him an invite to the $350,000 TVG Free for All Pace which will be contested at The Meadowlands on Nov. 20 – a race that likely will be the final one of his career.

He is owned by George Segal’s Brittany Farms who leads all owners with 21 Breeders Crown wins. Segal was asked if winning ever gets old.

The TVG Free for All Pace will give Perfect Sting a chance to test his mettle against older pacers for the first time.

If you’re a fan you’d love to see Perfect Sting stick around and race for another year, but business is business, and the plan is that future race cards hopefully will be filled with the children of this talented colt.