When it comes to the Kentucky Derby (G1), it’s never too early to start digging deep in search of a winner at hefty odds.

Corniche, trained by Hall of Famer Bob Baffert, has won the Derby seven times (a final resolution on his win with Medina Spirit remains following a post-race medication violation).

But, with Baffert suspended by Churchill Down for two years for his “record of testing failures,” the owner of Corniche, Peter Fluor may have to switch trainers for his unbeaten 2-year-old to qualify for the Derby.

While the road to the Derby is just beginning, it may be wise to start sorting through the early odds.

“Most of us are more focused on getting ready for Christmas than getting ready for May, but our customers have been desperate for us to get Kentucky Derby futures odds up on site!” BUSR spokesperson James Ross said. “We went live with Corniche at +2000 straight after Breeders’ Cup, but soon saw some smart money for the Baffert 2-year-old. He dazzled at Santa Anita last month (in the Awesome Again), albeit it at a very short price, to the point where Mike Smith barely had to touch him!

“Life wasn’t as easy in the Juvenile last week, as Bob’s relieved face demonstrated – but Corniche is the one to beat, and we make him our +1200 (12-1) favorite at this early point.”

And then there’s Jack Christopher, the likely Juvenile favorite who was a vet scratch due to left shin issue. The unbeaten colt trained by Chad Brown is listed at 14-1 by busr.ag, based on his victory in the Champagne Stakes (G1) at Belmont on Oct. 2.

“While I don’t mind Chad Brown’s 2-year-old, I suspect there’ll be more exciting prospects emerging in the next few months to (challenge) Corniche for market favoritism,’’ Ross added. 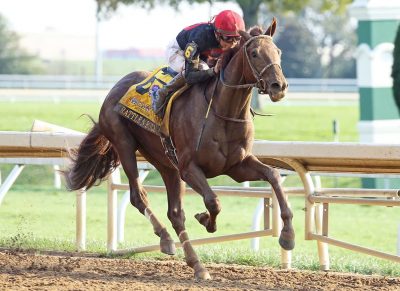 Rattle N Roll, winner of the Breeders’ Futurity (G1) at Keeneland on Oct. 9, also is 20-1 along with Baffert-trainee Winning Map, an impressive 4 ¼-length at Santa Anita on Oct. 1 in his only race.

The next trio of early Derby betting choices are at 25-1 (+2500) – Baffert-trainee Pinehurst (sixth in the Juvenile), Juvenile runner-up Pappacap, and Tiz the Bomb, the Juvenile Turf runner-up.

Baffert trains three of the top eight Derby contenders in mid-November, none of whom are eligible to earn Derby qualifying points due to the trainer’s suspension.

Fluor, who owns the horse along with K.C. Weiner as Speedway Stables, purchased Corniche for $1.5 million at the Ocala 2-year-old sales. He said the Baffert issue would be addressed in a timely manner, which is likely how the owners of other Derby contenders trained by Baffert are feeling.

“That is a fair question. This race is so important for Corniche’s career and what it could mean as far as 2-year-old focus. We wanted to get to this race and see how we did,” Fluor said after the Juvenile. “Bob and I will sit down and talk and so we’ll see what happens. We haven’t made any decisions.”

Would he switch trainers?

“It would be difficult, yeah,’’ he added. “But Bob and I have always talked. We’ve been very candid. I flew out and visited with him and said, ‘We’ve got to do what’s right for the horse.’”

Baffert’s take: “Well, the Derby is a long ways off and so right now my focus was just getting here, and we’ll see how it plays out. And there’s still a lot of things going on and so – and, really, there’s not much to talk about that right now. … We have a really good horse, and we have to keep him healthy …”

Hall of Famer Mike Smith rides Corniche and the pair are a formidable duo.

Since Corniche received no Derby qualifying points for winning the Juvenile (20 goes to the winner) and none for winning the Awesome Again (10), the top 5 point-leaders are Pappacap with 12, Rattle N Roll with 10, Jack Christopher with 10, Major General with 10, and Commandperformance with six.