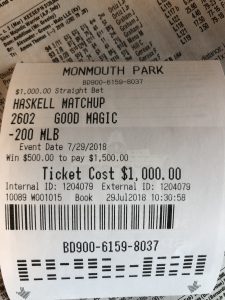 The Haskell Invitational is two months away, but drama is already building for the upcoming headline event of the recently opened Monmouth Park race meet.

Now that the Preakness is in the books, with War of Will the winner, a showdown has been set up between DQ’d winner of the Kentucky Derby, Maximum Security, and the Preakness champ, who some people believe could have won the Derby if not bothered turning for home. The showdown won’t take place in the Belmont Stakes three weeks from now, however, but it may take shape in the next big 3-year-old race that will be on everyone’s radar — the $1 million Haskell Invitational at Monmouth Park on Saturday, July 20.

Maximum Security’s connections, led by trainer Jason Servis, have already pretty much assured us that their unofficially undefeated, uncrowned Derby champion will return to action in the Haskell — and Maximum Security owner Gary West is dangling a $5 million challenge to War of Will (and others) in a war of words that has percolated between the two horses’ owners and jockeys since the fallout from the Derby fiasco.

While talking about the Haskell, this seems like a good opportunity to put some focus on the 2019 Monmouth Park meet. This year’s Monmouth stand will feature big purses, boosted by sports betting revenue at the racetrack. And where there are big purses there will always be big fields. Even though Monmouth occasionally gets overlooked in the long shadow cast by summer racing at NYRA, the track nevertheless offers a strong East coast racing and wagering alternative at this time of year.

The Monmouth Park meet began on May 4, and is currently racing only on weekends until June 9. In June, Monmouth will add Fridays to expand to three days a week until August 23. The meet will encompass a total of 61 racing days, up from 52 days last year, plus eight more all-turf September race dates held at the Meadowlands.

While we patiently wait for Haskell Day (which will be run a week earlier this year than its traditional Sunday date at the end of July) there will be plenty of racing and wagering action to occupy your time at Monmouth. Here are some tips to help you succeed at the Jersey shore.

Perhaps more so than any other track, racing at Monmouth Park is defined by one predominant factor: speed. Thanks to a lightning-fast track surface, tight turns, and a short stretch, Monmouth Park very well might be the most speed-conducive track in the country. Closers are fun to cheer for, but if you’re betting Monmouth and you want to make money — consistently — you must downgrade the closers and bet speed horses and close-to-the-pace horses that can be no more than two lengths behind at the quarter pole.

The Monmouth Park speed bias is apparent at all distances on the main track. It is greatest in short sprints and gets gradually milder as the distances increase. In short sprints at 5 1/2 to 6 furlongs on the Monmouth dirt, front-runners win over 35% of all races, with most of the remaining winners either pressing or stalking the pace no further than a couple lengths back.

The speed bias is a little less in two-turn routes than it is in sprints, but frontrunners are still good bets at a mile and at 1 mile & 70 yards.  While the the pace-setter does not win as many of Monmouth’s routes as sprints, horses with speed that can at least press the pace tend to far outperform horses coming from father behind.

The majority of Monmouth’s sprints are run at 6 furlongs, and while the rail (post 1) is the best place to be at that distance, it is not a strong enough bias to prevent the frontrunner(s) from winning from nearly any gate draw (interestingly, at 5 1/2 furlongs, middle posts 4-7 do slightly better than inside draws). It should be noted, however, that speed and the rail in 6-furlong races is an especially deadly angle at Monmouth Park.

At most route distances, it holds true that the inside posts 1-3 are the best gates to break from. At a mile, however, it is somewhat of a surprise to note that middle posts 4-7 usually do a little better than the three inside gates.

This is counterintuitive since one mile races have the shortest run to the first turn and you’d expect the inside bias to be at its strongest in these races. Finally, just as you’d expect, posts 8 and outward are almost always detrimental in Monmouth routes.

On the Monmouth turf course, meanwhile, it is not surprising to note that inside posts are also the best posts, since it follows that if the main track has tight turns and a short stretch, then the turf course must also have an even smaller and tighter layout. The inside posts are best on Monmouth’s turf course at all distances and the rail post, in particular, seems like the best place to be.

Just like on the main track, speed is handy on the Monmouth grass, especially in turf sprints, where speed rules. Speed does well in routes too, but it’s more about tactical speed than front-running speed, with wire-to-wire types winning only about 15 percent of the grass route races. Still, while wire-to-wire horses don’t always last, tactical speed is still the key on the Monmouth grass course, where you at least want to bet pace-pressers who can stay within early striking distance of the leader(s).

Fast times are in store at the Jersey Shore, and it’s all happening this summer at Monmouth Park. While we all wait for the meet’s showcase card on Haskell Invitational Day and a possible showdown between War of Will and Maximum Security, there are plenty of other reasons to bet Monmouth this summer.