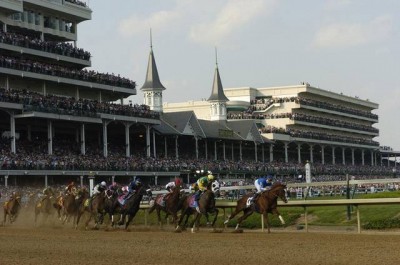 2013 was the first year of a new branding for the Kentucky Derby. Branding has been important to Churchill Downs and, with its new implementation of a new points system, called “The Road to the Kentucky Derby,” it has faced both controversy and applause.

The points system was installed in time for the 139th running of the Kentucky Derby. Initially, there were 36 stakes races offering a varying amount of points to two- and three-year-old colts competing for a spot in the Louisville track starting gate — 17 of which are marquee events making up a 10-week run up to the feature race, which is known as the “Kentucky Derby Championship Series.” This points system replaced the previous qualifying requirements for the Kentucky Derby.

Previously, horses earned a spot in the Kentucky Derby starting gate based on their graded stakes earnings. According to a 2012 press release issued by Darren Rogers, senior director of communications & media services for Churchill Downs, Inc., “The ‘Road to the Kentucky Derby’ point system was created to establish a clear, practical and understandable path to the first leg of horse racing’s Triple Crown, as opposed to the approximately 185 graded stakes races worldwide — including 60 open races and another 43 races restricted to fillies in North America — that counted toward the Derby selection under the previous eligibility process.”

CDI CEO and Chairman Bob Evans had a primary concern when this change took place: to create new fans.

“Additionally, the new system, which gives us greater stability, represents historical relevancy and helps to ensure our longstanding mission of assembling the finest group of three-year-olds in the starting gate for a race at the classic distance of 1 ¼ miles on the first Saturday in May. We want to maximize the quality of the Derby field and protect the integrity of the race, while respecting the tradition and relevance of paths taken to the race by previous Kentucky Derby winners and prominent starters,” Evans said.

The points system is currently divided into two sections: the “Kentucky Derby Prep Season” and the “Kentucky Derby Championship Series.” The Prep Season offers 19 races on synthetic and dirt surfaces at tracks across the country, with the minimum distance of one mile. These races take place from September of the two-year-old season to February of their three-year-old season. Next, then, are the 17 top events in the Championship Series. These races are run on dirt and synthetic surfaces across the country and are packed into a 10-week timeframe leading up to the Kentucky Derby.

The second leg of the Championship Series offer races worth 100-50-20-10 points to the top four finishers. Major races in this section of the series include the Florida Derby, UAE Derby, Louisiana Derby, Arkansas Derby, Wood Memorial, Santa Anita Derby, and the Blue Grass Stakes. These are used as the last stepping-stone for horses before they ship to Louisville for the biggest race of their young lives.

“…We continue to believe that the system encourages meaningful competition with an emphasis on current form rather than past accomplishment,” said Rogers. “We’re trying to identify the best three-year-olds to go the classic distance of 1 ¼ miles on dirt.”

If a horse is on the verge of the Derby field, it also has options in the Lexington Stakes at Keeneland — a “wild card” race that offers 10-4-2-1 points to the top four horses. Typically, in the past, horses that run in the Lexington target the Preakness Stakes. In 2015, Lexington Stakes winner Divining Rod (Tapit) finished third in the Preakness behind American Pharoah and Tale of Verve.

When two or more horses are tied in total points, career earnings in non-restricted stakes races is the first tiebreaker, followed by total lifetime earnings and, lastly, a lot or “shake.”

“We’ve left room for growth and innovation,” Churchill Downs Racetrack President Kevin Flanery notes. “I can envision this as a 40-race series down the road. We plan to work with the racetracks that are part of the ‘Road to the Kentucky Derby’ to promote the series and help build business on days when their races take place. We see this new point-based series as something the serious handicapper and the casual sports fan can wrap their arms around — a clear, cohesive and understandable path to the Derby and one that will be fun to follow. It’s a powerful marketing initiative that has the ability to get thousands of new fans to pay attention to our sport in advance of the Triple Crown. It will take time, but we want to be proactive and do something.”

The next two races in the Kentucky Derby Championship Series are run on March 26. These races are the Louisiana Derby, run at Fair Grounds in Louisiana, and the UAE Derby, run on the Dubai World Cup undercard. Both races offer 100-50-20-10 points to the top four horses. The UAE Derby features the unbeaten filly Polar River.

Casey Laughter
Casey Laughter has been following horse racing since 2003, when Funny Cide stole her heart and took Louisville by storm. After that, Casey had succumbed to the horse racing bug — and has been unable to shake it after all these years.

Casey has visited tracks in Ohio, Kentucky and New York, covering events from a weekend at Keeneland to the defeat of a Triple Crown winner. As a student, Casey is hoping to break into the racing world with her photos and her writing.

She has a personal blog named A World Full of Furlongs and a photography portfolio on Flickr named Casey Laughter Photography. She also writes for another horse racing website named Lady and the Track.