After a thrilling stretch duel in the $750,000 Jockey Club Gold Cup (G1) on Saturday at Belmont Park, Vino Rosso nosed out Code of Honor to finish first, but to the surprise of hardly anyone, an inquiry ensued and the result was reversed.

Yes, another disqualification for interference in a big race. Not the magnitude of the Kentucky Derby (G1) DQ of first-place finisher Maximum Security, but enough to elevate Code of Honor to the victory in the Breeders’ Cup Challenge “Win and You’re In” race for the Breeders’ Cup Classic (G1) at Santa Anita on Nov. 2. 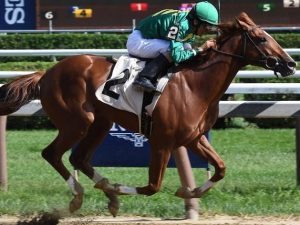 Code of Honor, under Hall of Famer John Velazquez, moved into challenging position coming out of the final turn, with Vino Rosso, Irad Ortiz Jr., aboard, in the lead and just off the rail in his bid to go wire-to-wire.

The 3-year-old Travers (G1) winner and the 4-year-old Gold Cup at Santa Anita (G1) winner battled nose to nose down the stretch, but Vino Rosso drifted several paths outside and brushed up against Code of Honor, who looked to be moving toward the lead, three times between the furlong- and sixteenth poles.

Vino Rosso stayed in front, and Code of Honor never gave in as the two crossed the wire a nose apart. The stewards ruled that Vino Rosso interfered with Code of Honor and awarded the victory to Hall of Famer trainer Shug McGaughey’s chestnut son of Noble Mission.

As you may recall, Code of Honor was challenging for the lead held by Maximum Security in the Derby when bothered by a shuffling of horses that included Maximum Security drifting out and interfering with several horses. Code of Honor finished third but was moved up to second, and runner-up Country House was elevated to first from second place. 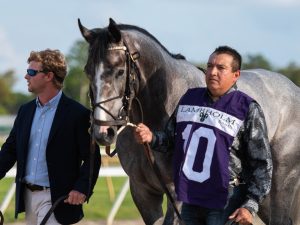 Tacitus was third in the JCGC, followed by Woodward (G1) winner Preservationist and Olympic Village. Code of Honor, owned by W.S. Farish, returned $6 for a $2 win bet as the 2-1 second choice behind favorite Preservationist. Time for the 1 ¼-mile JCGC was 2:00.30.

“Vino Rosso and us both ran winning races, and it’s too bad it had to end up this way,’’ said McGaughey, who won Jockey Club Gold Cup for the fourth time. “We got on the lucky side of it. I’m proud of Code of Honor. It was his first time against older horses.’’

As for the BC Classic, McGaughey said, “It’s always exciting. We’ll just see how he comes back and I’ll talk to Mr. Farish and make up our minds.”

Code of Honor improved his 2019 record to four wins, a second and third and earnings of $2,151,570, and remains in contention for a 3-year-old divisional championship. He won the Fountain of Youth (G2), finished third in the Florida Derby (G1), then was the official runner-up in the Derby before winning the Dwyer (G3), Travers and now the Jockey Club Gold Cup.