It’s hard to believe it’s been 11 years since the great Zenyatta won the race that would eventually bear her name, using the Lady’s Secret as a springboard to victory in the 2008 Breeders’ Cup Ladies’ Classic (G1).  She won the race again in 2009, this time going on to win the Breeders’ Cup Classic (G1), and for the third and final time in 2010 to stretch her record to 19-0, just before concluding her career with a heartbreaking second to Blame in the Classic at Churchill Downs. 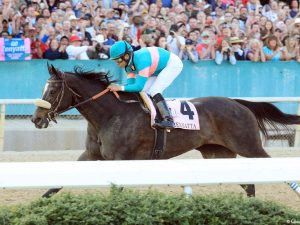 Inaugurated in 1993 and originally named for the Hall of Famer and 1986 Horse of the Year Lady’s Secret, Santa Anita in 2012 renamed the 1 1-16-mile race the Zenyatta Stakes (G2) to honor the mare who left her mark not only on California racing, but became a household name worldwide for her dance moves, stunning come-from-behind style and impressive record of 19 victories from 20 starts.

Only Beholder – who also won the race three consecutive times from 2013 to 2015 – has come close to equaling Zenyatta’s legacy, although several standouts have the race on their resumes, among two-time winner Hollywood Wildcat, Azeri and last year’s winner, Vale Dori, who will face five others in the 1 1/16-mile race on Sunday.

Year-end implications for the division are high as the Zenyatta is a “Win and You’re In” challenge race for the Nov. 2 Longines Breeders’ Cup Distaff (G1).

Zenyatta’s trainer, John Shirreffs – who also won the race in 1999 with Manistique – tries for victory No. 5 with Paradise Woods. The Union Rags mare won the Zenyatta in 2017 while in the care of Richard Mandella, and this year for Shirreffs won the Santa Margherita (G2), finished second in the Santa Maria (G2), third in the Beholder (G1) and fifth in the Santa Monica (G2), and most recently was fourth in the Clement L. Hirsch (G1) at Del Mar in July.

This year’s Zenyatta appears to be a rematch between the top four finishers in the Hirsch with two others attempting the upset. 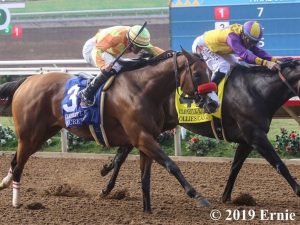 Bob and Karen Eggert’s Ollie’s Candy was the narrow winner in the Hirsch after a wire-to-wire performance under Hall of Fame jockey Kent Desormeaux. What made the effort so impressive is that the daughter of Candy Ride looked beaten in the lane when she was challenged by Secret Spice, but dug in gamely to hold on for the win. She’ll no doubt be sent to the lead again and a repeat of her last makes her tough. Desormeaux will be back aboard.

Secret Spice, who will lead the field to post, is the 8-5 favorite despite her loss last out, but she had a good excuse, she stumbled at the break and lost a bit of momentum in getting her early position. This Little Red Feather Racing and Bobby Flay-owned daughter of Discreet Cat is talented and consistent, but her best racing has been at shorter distances, though she has been close at 1 1/16 miles in her last two. Flavien Prat will be back aboard for Richard Baltas and a clean trip may be all they need to get the win.

La Force won the Santa Maria (G1) at this distance over this track on New Year’s Day before hitting the sidelines for six months. The German-bred daughter of Power now makes her third start off of the layoff after a third in the Hirsch and a well-beaten seventh in the John C. Mabee (G2) on the turf. Back on the main track where she’s done her best racing since being imported stateside. She has a good record at the distance, too. Patrick Gallagher trains for the Willifords and former CHRB chairman Chuck Winner. Drayden Van Dyke rides and one thing we can be sure of is her rolling down the lane late from her position at the back of the pack in the early going.

Paradise Woods has her quirks, but she is talented enough that if she delivers her best she’ll be a contender. Abel Cedillo rides for the first time.

Mongolian Humor makes her second start since being claimed for $20,000 two back by Vladimir Cerin, and off a nice allowance win at Del Mar a month ago. They roll the ambitious dice here and though she’s mostly a sprinter, she may take to a little added distance under jockey Norberto Arroyo Jr. Kaydetre is a talented allowance/non-graded stakes type who is being tossed to the wolves here.