California Chrome Is Ready to Roll

California Chrome gets ready to load into the gate prior to his victory in the 2016 Dubai World Cup.

After a recent mile work in 1:39.60, all systems are a go for Dubai World Cup winner California Chrome.

After his previous work, seven-eighths in 1:26.40, Sherman was not happy. He believed that Chrome was beginning to get to relaxed, so this time around, he added a twist — a new workmate. The twist seemed to work, because afterwards it was a much happier Art Sherman.

“I put some company, a target, for him to work at today and it really made a difference. He was trying to run over top of the other horse, he was saying ‘hey I wanna get that horse!’”

Despite Sherman’s upbeat attitude, there were still some questions raised about the work on social media. Mostly, people didn’t understand why Sherman was so happy about the work when his seven-furlong time (1:27.60) was nearly a full second slower than his work last week.

“I think he went a lot better than that,” said Sherman of the seven-furlong split that went on record for this morning’s work.

“The horse did what I wanted to do. I know this horse like the back of my hand. I can understand a little, because you see Baffert work in 10, 11, and 12 — just really fast times. Chrome has never done that, ever since I’ve had him. And now we’re 12 million dollars later, so we can’t be making too many mistakes.”

This week wasn’t about the speed, but getting those competitive juices flowing. Next week, at Del Mar is when Sherman plans to put a little speed back into Chrome in his final work before the San Diego Handicap.

“I’ll get to work him next Saturday, at Del Mar, where I’ll give him a sharp five-eighths. After that, he’ll be ready to roll.”

Not many would dispute that statement, but the question most will ask on race day is just how ready he will be, especially against a field that could include Bob Baffert’s imposing Dortmund? 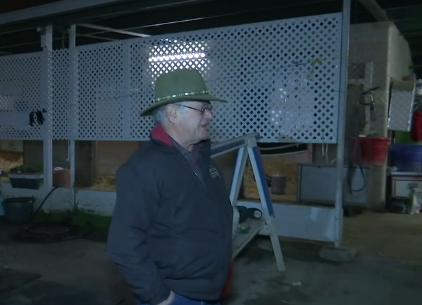 Still, despite knowing how good Dortmund has been training, Sherman isn’t too worried losing.

“Chrome is Chrome. You’re going to have to outrun him to beat him,” he said.

Currently, Sherman is looking to bring California Chrome to Del Mar on Wednesday, giving him a chance to school before the big day.

After the San Diego the next target is the Pacific Classic where he will likely take on the California super mare Beholder. It will likely be the race of the year, and it is a match-up that Sherman is very eager to see.

“It will be the battle of the sexes; it’s going to be hyped up. To be honest, I’m not even sure if I can outrun [Beholder]. She’s a pretty awesome mare.”

Win, lose, or draw, however, all of this is just icing on the cake for Sherman, who calls California Chrome “the best horse he’ll ever train.”

For Sherman, there is nothing more for Chrome to prove. He is a champion that has done it all. He’s run well on every surface that they have tried him on, while racing against the best competition that they can find.

The only hope Sherman has now for the flashy son of Lucky Pulpit is that he will be able to close out his career with a bang. With the form he is in this year, California Chrome could very well make that wish come true.

However, all of that is in the future. Currently, he is just starting to prime his engine for the second half of his 2016 campaign. So, buckle up your seat belts and get ready, because California Chrome is ready to roll!