The $200,000 Best Pal Stakes (G2) at Del Mar on Saturday is the first graded stakes of the year for 2-year-olds racing in Southern California, — a race named for the California-bred gelding foaled just down the road from where the Turf Meets the Surf.

In the 51st edition of the 6-furlong Best Pal, Hall of Fame trainer Mark Casse (elected in 2020, and formally inducted on Friday, Aug. 6) sends out 8-5 favorite Pappacap in a field of seven.

In his career debut, the son of Gun Runner won by 2 ¾ lengths at Gulfstream Park on May 14.

Best Pal one of the best

For more than 20 years the Best Pal was run as the Balboa Stakes from distances of 6 furlongs to a mile. In 1995, the summer feature was re-named for the eventual Hall of Famer, who won the Balboa in 1990 on his way to victory in the Del Mar Futurity, and a runner-up finish in the Kentucky Derby the following year. It has been contested around one turn since 1986.

In addition to the Balboa, Best Pal won the inaugural running of the Pacific Classic (G1) in 1991, plus the Hollywood Gold Cup (G1) and Santa Anita Handicap (G1), sweeping the three big events for handicap stars in Southern California. He won 17 stakes races overall.

Upon his retirement in 1996 at age 8, Best Pal was sent to his birthplace, Golden Eagle Farm in Ramona, just miles from Del Mar, and after two years of well-earned rest and relaxation in a second career accompanying the young 2-year-olds to and from the track, Best Pal laid down and died unexpectedly at age 10.

The cause of death was reported to be a heart attack, but to many who saw him run they’d know there was nothing ever wrong with the big brown gelding’s heart.

The humbly bred Best Pal currently rests under a 600-year-old Oak Tree where what remains of Golden Eagle is located today.

For the third year, the distance of the Best Pal has been cut back to six furlongs from the previous multiple-year stint at 6 ½, mostly due to the lack of enough juvenile races run in progressive distances from Santa Anita’s spring meeting, through Los Alamitos’ two weeks in early July and then here to Del Mar’s summer season. Regardless of distance, whoever wins this will claim – at least temporarily — the title as the circuit’s division leader and status as the early favorite for the Del Mar Futurity (G1) on Sept. 6.

Flying Paster, Saratoga Six, Timber Country, Dixie Union, Officer, Roman Ruler and Lookin at Lucky are the recognizable names on the list of previous winners, but the most notable is 2015 juvenile champion and 2016 Kentucky Derby (G1) winner Nyquist.

Best Pal himself was just one of Golden Eagle Farm’s three winners of this race and the longtime major racing and breeding operation, which hasn’t been represented by a runner since 2017, retains the title as top owner. Retired jockey Alex Solis rode five winners throughout his career and Hall of Fame trainer Bob Baffert has saddled eight winners, though he has none running Saturday. 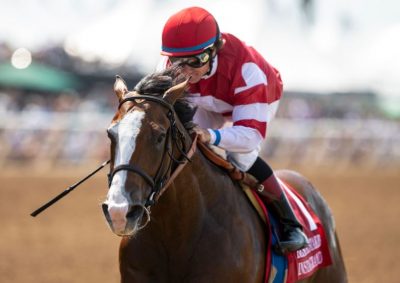 Only one of the seven who will head to the gate for this year’s renewal has faced winners and that’s Lovingier, Beckerle or Carrillo’s Thirsty Always, a son of Stay Thirsty who broke his maiden at first asking at Santa Anita in mid-May before taking the Everett Nevin Stakes a Pleasanton a month ago. So far, he’s won at 4 ½ furlongs, then 5 ½, so this next progression to three-quarters and graded stakes company is a logical step.

A lot about these juvenile races are about pedigree and while this California-bred doesn’t have the flashiest one, it’s hardly one to snivel at. He is a son of the multiple Grade 1-winning millionaire Stay Thirsty and the Grade 3-winning Not For Love mare Angela’s Love. Lovingier bred this colt and was also listed as the seller when the hammer dropped at $70,000 last fall at the Fasig-Tipton California yearling sale, his fellow owner Carrillo signing the sales slip that day.

So far, Thirsty Always hasn’t done anything wrong, has earned good numbers and it may serve him well to be an off-the-pace type in this field with a good amount of speed. Cesar Ortega rides for trainer Walther Solis who, ironically, was the longtime farm trainer for Golden Eagle Farm before it was shuttered.

Solis also sends out another son of Stay Thirsty owned by Lovingier, the maiden winner Finneus. This fellow Cal-bred was third in his debut back in early May but came back with a stunning win against state-breds about two months ago where he recovered from a botched break, settled last early at 5 ½ furlongs, spotted the field several lengths and closed like a freight train to claim the win by three-quarters of a length, stopping the clock in a decent time of :59 on a fast track. Add to the performance was the nice BRISnet speed rating of 90, which puts him as the one to beat here. Umberto Rispoli takes over for a traveling Flavien Prat.

Casse, who sent out John Oxley’s Skyway to win this race in 2014, has high hopes for Rustlewood Farm’s homebred Pappacap, who is one of many winners from the first crop of 2017 Horse of the Year Gun Runner. This colt is coming off an impressive 2 ¾-length maiden score at Gulfstream Park two months ago and the frontrunning victory earned some respectable figures which goes well with an impressive turn of foot.

The colt has been working strongly over the Del Mar main track for a few weeks, which can only help, and he gets the services of Joe Bravo, who is having a pretty good first summer on the California shore.

Leading trainer Peter Miller will be represented by Peter Redekop’s Aquitana Arrival starting for the first time for the San Luis Rey Downs-based conditioner. The Carpe Diem colt, who was just a $10,000 Keeneland yearling ten months ago, is coming off a win in his debut for trainer Bill Morey at Churchill Downs back in late May and now returns in California in his stakes debut. He has some tactical speed and his figures from his debut are decent, and we all know to never count Miller out when handicapping stakes races. Juan Hernandez rides.

Miller also sends out Gary Barber’s Bet On Mookie, a $125,000 son of Uncaptured who broke his maiden second out by 5 ½ length at Santa Anita in June in wire-to-wire fashion. He has some strong figures and will be part of the early pace and he really doesn’t need much improvement to be considered a top choice. Abel Cedillo, who was aboard for his first start – a second-place finish – is back for this stakes debut.

James Chapman ships Belterra Park maiden winner Our Empire, an $8,000 son of Empire Maker who he co-owns, out West looking for a graded win. It’s hard to tell how this leap in class will affect this colt, but he has a pair of good works for this race over the surface. Tyler Baze will ride and it’s certain the pair will be part of establishing a predicted quick early pace.

Olympic Legend, by Street Boss, broke his maiden in his second start at Los Alamitos in late June and takes a big step up in class. He has a ton of speed and will be gunning for the front under Jose Valdivia Jr. playing “catch me if you can.”

Post time for the Best Pal, which is the afternoon’s ninth race, has been set at 6:06 p.m. PT.