It was all Knicks Go in the $1 million Whitney Stakes (G1) at Saratoga on Saturday as he seized the lead from start and won going away by 4 ½ lengths against a foursome of formidable rivals. 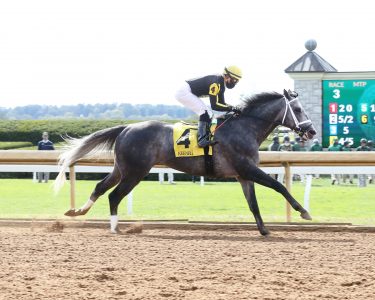 Trainer Brad Cox, winning many of the biggest races this year, anticipated Knicks Go would excel at two turns going 1 1/8 miles, and he was spot on.

Ridden by Joel Rosario, the

5-year-old son of Paynter, Knicks Go made easy work of runner-up Maxfield (7-of-8 coming into the race), and third-place finisher Silver State (six-race winning streak coming in). Swiss Skydiver, the 2020 Preakness winning filly, was fourth and BY My Standards fifth.

The winning time was 1:47.70, with Knicks Go returning $4.10 for a $2 win bet as the even-money favorite. Knicks Go, who won the Cornhusker Handicap by 10 ¼ lengths prior to the Whitney, improved his career record to 22-8-3-1 an earnings of $5.38 million for owners Korea Racing Authority.

“He ran huge,” said Cox, who also trains Belmont Stakes (G1) winner Essential Quality, Haskell (G1) winner Mandaloun, and Clement L. Hirsch (G1) winner Shedaresthedevil. “There’s always a concern when you ship to Saratoga, and this can be a demanding surface. I thought the race at Prairie Meadows really tuned him up well. He was well within himself and that was his big work for this race five weeks ago. He had three maintenance works at Ellis and he came in here a fresh and happy horse, ready to go.”

“He’s a very sound horse and he’s happy,” said Cox. “We wouldn’t be here if he wasn’t. We’ll come up with a plan somehow. We’ll just let the dust settle but it will probably be the Classic.”

“Turning for home, I thought he’s going to have to do some running,” said Cox. “With that big of a lead up the backside I could envision him maybe continuing to have that type of lead and maybe hold on down the lane, but he really showed some fight down the lane, and I thought, ‘Wow, they’re running at him.’ and he responded really well and kicked on home.”

Added Rosario: “The way he was moving he just skipped to the last quarter-pole. He loved what he was doing. He was very relaxed and going forward. I was really happy with the way he was going turning for home.”

Maxfield came into the race off a pair of Grade 2 wins, the Alysheba and the Stephen Foster.

“He ran his race. No excuse, really,” said trainer Brendan Walsh. “I think the best horse won on the day. Jose (Ortiz) said he got to a point where he thought he was going to get him but (Knicks Go) didn’t stop and didn’t come back to him. But he ran well. Second is no disgrace. We’re always proud of this horse and there will be other days.”

Silver State, winner of the Met Mile last out, is trained by Steve Asmussen, who earlier in the day broke the record for wins in North America with No. 9,446 in the fifth race at the Spa.

In other races at the Spa:

In the biggest harness race of the year, Captain Corey took the lead early, and then drew off in the stretch to give trainer-driver Ake Svanstedt his second win in the $1 million Hambletonian on Saturday at the Meadowlands in East Rutherford, New Jersey.

“He’s a good horse who will fight but he was a strong horse today,” said Svanstedt.

Captain Corey ($4.60) won for the third time in five starts this year, and the eighth time in 12 career outings.

Captain Corey won by 1 1/2 lengths over longshot Spy Booth in 1:51.1. Ambassador Hanover, one of three colts in the race trained by Svanstedt, finished third.