In the days leading up to the $3 million Pegasus World Cup Invitational (G1) at Gulfstream Park in Hallandale Beach, Florida, usracing.com is publishing profiles of the horses in the race set for Saturday, Jan. 29. 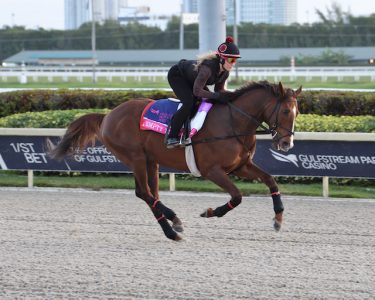 He’s in and he’s ready to run with the fastest horses in the land as a longshot in the Pegasus World Cup. Good luck with that.

Empty Tomb is one of the seven double-digit odds horses taking on speedballs and favorites Knicks Go and Life Is Good in the fifth running of the Pegasus.

It didn’t take much thought for owner John Grossi and trainer Robert Falcone, Jr., to make the decision to run – they were recruited by Gulfstream Park officials.

The 6-year-old was claimed last summer at Saratoga for $80,000. He finished last in stakes races at Belmont and Parx, but won an allowance race at Aqueduct in November, and ran second in the Queens County. His running style is similar to the favorites, so he’ll have a rugged road ahead.

But with a field of nine entered, third place is worth a few hundred thousand dollars, and fourth is worth over $100,000.

“Even though it looks like everyone else, including us, is running for third-place honors, we’ll take a shot as long as the horse is doing good, which he is,’’ Falcone told drf.com.

Betting advice: Can he finish in the top 5 and a decent check? Don’t think so. His front-running style cannot keep pace with Knicks Go and Life Is Good.