Kentucky Derby Day at Churchill Downs is not only about the Kentucky Derby — for horseplayers it’s all about an entire day of excellent racing and wagering with plenty to choose from.

The 14-race card features seven stakes, including six undercard stakes leading up to the Run for the Roses. The Derby includes perhaps the day’s strongest favorite, Tiz the Law, who will be tough to go against even at low odds.

That means most of Saturday’s premier betting opportunities will be found on the undercard, which is filled with great races and challenging handicapping puzzles to tempt handicappers.

The undercard stakes also will provide players with a bunch of chances to hook up their Derby pick(s) in the Pick 3, Pick 4, Pick 5, and the Pick 6.

Here’s a closer look at the six undercard stakes: 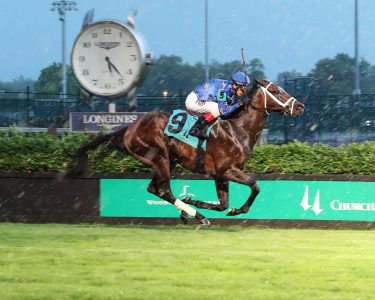 The 1 1/16-mile turf race kicks off the stakes festivities with an eight-horse field that looks top-heavy with a pair of low-odds favorites leading the way – #4 Field Pass (2-1) and #5 Smooth Like Straight (8-5).

Smooth Like Straight comes in off back-to-back stakes wins including Del Mar’s La Jolla Handicap (G3) last time out, and a mile turf win at Churchill the time before in the War Chant, where he beat perhaps this race’s top contender, Field Pass, by two lengths. Field Pass exited that race to win two straight stakes in Churchill’s Audubon and Keeneland’s Transylvania (G3) before losing a half-million-dollar race at Saratoga last time out.

If Smooth Like Straight gets cooked on a hot pace, Field Pass should be the one coming late. For handicappers looking beyond the two favorites, the most intriguing upset chance belongs to #1 Taishan (15-1), a horse that has faced top-caliber competition on dirt and now makes his career turf debut with Julien Leparoux aboard for Richard Baltas and some grass breeding in his back pocket.

The one-turn mile for 3-year-olds is wide-open, with several horses as logical contenders based on their best efforts. Can’t blame those who give the benefit of the doubt to the Bob Baffert-trained #1 Cezanne (3-1), despite the horse’s loss last time out in Del Mar’s Shared Belief behind Derby-bound Honor A.P. and Thousand Words, also trained by Baffert. Cezanne only lost that 1 1/16-mile race by 1 1/2 lengths and this cutback to a mile around one turn could be enough to do the trick for a horse that began his career 2-for-2. The other primary contenders are the 1-2 finishers from the H.

Allen Jerkens (G1) at Saratoga, winner #2 Echo Town and runner-up #6 Tap It to Win. Both ran well and looked legit in that 7-furlong race, and neither would be a surprise in this spot. Serious contention in this race goes beyond even those horses. Woody Stephens (G1) winner #7 No Parole (6-1) will be winging on the lead and trying to get the mile wire-to-wire, and #9 Rushie (4-1) bypassed the Derby in order to run here coming off third-place finishes in the Blue Grass (G2) and Santa Anita Derby (G1). If you’re playing multi-race wagers, it’s worth going deep in this race by taking firmer stands in some of the other races and spreading in this race by using all five horses mentioned above. You could even throw in a sixth horse, #5 Digital (12-1).

The 2-year-olds take center stage in this one-mile race on the main track that drew a field of 11. The standout is #10 Therideofalifetime (7-5), who graduated by eight lengths at Keeneland and then finished a respectable second last time out in the Saratoga Special (G2). Young horses can improve at light-speed, so Therideofalifetime is no slam dunk, but his speed figures crush these and someone will need to improve by leaps and bounds in order to beat him. If you’re spreading in the multi-race wagers by using multiple horses in the Pat Day Mile, you can slim down your tickets by singling Therideofalifetime.

Those who want to beat the favorite, or who are looking for value horses that can bump up the value of exactas and trifectas, might want to consider horses that impressed with off-the-pace maiden wins in their last races, such as #1 Drop Anchor (15-1), #2 Sittin On Go (15-1), #6 Belafonte (20-1), and particularly #7 Pico d’Oro (5-1), who won a $100,000 stakes at Ellis Park in his last start. Winning from far off the pace in sprints is often a sign of high quality in young 2-year-olds.

The mile for older fillies and mares begins the late pick 4 and features a big favorite with #4 Newspaperofrecord (4-5) looming large in an eight-horse field. Newspaperofrecord was the Breeders’ Cup Juvenile Fillies Turf (G1) winner on this course in 2018. After suffering three losses for trainer Chad Brown in mid-2019, she’s returned to top form with two Belmont wins — the 7-furlong Intercontinental (G3) in June and the one-mile Just a Game (G1). Both wins sported impressively-high speed figures, she is 2-for-2 at the distance, and a Grade 1 winner on this turf course for a multiple Eclipse-winning barn.

The only possible weakness is perhaps her front-running early speed running style, which leaves her vulnerable to getting cooked in a speed duel. She’s always faster than the other speeds, however, so that scenario hasn’t happened yet. Other live options in this race, at least in the exotics, include #3 Juliet Foxtrot (5-1), whose running lines have come against the best Grade 1 female turf competition, and an up-and-coming closer like #7 La Signare (10-1), who could pick up the pieces it there’s a meltdown up front. 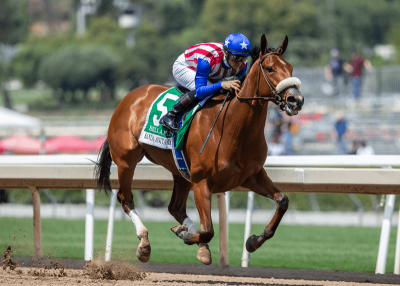 Formerly known as the Humana Distaff, the 7-furlong race drew a tough 10-horse field loaded with the best older fillies and mares in the division. As good as all of these horses are up-and-down the field, and with no offense to a horse like Ce Ce, who looks better going longer, this race boils down to a three-horse battle between #1 Mia Mischief (6-1), #8 Serengeti Empress (9-5), and #9 Bellafina (3-1). Serengeti Empress seems to have an edge after shortening up successfully last time out to win Saratoga’s Ballerina (G1) wire-to-wire, a length ahead of Bellafina.

Serengeti Empress won the Kentucky Oaks (G1), and usually horses cutting back into sprints from longer distances don’t have the kind of early sprint speed she possesses, which is the key to her success. She withstood splits of :21.3 and :43.3, and unless that effort cooked her, she should repeat. Bellafina won the 6-furlong Desert Stormer (G3) at Santa Anita earlier this year, but mostly has been settling for second in her recent Grade 1 outings, such as the Balerina La Brea, and Breeders’ Cup Filly & Mare Sprint. The other contender who shouldn’t be overlooked is Mia Mischief at 6-1 on the morning line. She’s a five-time winner on this track and is the defending champion. Cover the three contenders mentioned above, and you should cover this race in the multi-race wagers.

The undercard feature is the Turf Classic at 1 1/8-miles for older horses, with a field of 10 and probably the toughest handicapping race on the card. If you’re playing wagers like the Pick 4 and Pick 5, and you’re still alive, you may be happy you streamlined your tickets earlier in the sequence to you could spread in this race by using several of the contenders, most of whom can win on their best day if the pace falls just right. The interesting thing is that many of the top runners have the same early speed or pace-pressing running style.

That could lead to a fast pace that sets the race up for a closer. Plus is doesn’t make matters any easier that Chad Brown trains three horses in the race, and all of them appear to have the right running style and can stay out of a pace meltdown. On paper, the horse to beat is #1 Factor This (3-1) based on four straight stakes wins including the Wise Dan (G2) at Churchill on June 20. He’s speed and the rail, but will face pressure throughout and will have a tough task ahead. She’s a horse that needs to be on your tickets, as do other speed horses #9 Somelikeithotbrown (8-1), coming out of a wire-to-wire win in Saratoga’s Bernard Baruch (G2), and #10 Spectacular Gem (10-1), coming out of a front-running $100,000 stakes victory at Ellis Park.

With all that pace, however, you can’t just use the speeds, you also better put in the closers as well. For that, go ahead and use all three Brown trainees with an off-the-pace running style, including #3 Rockemperor (7-2), #4 Digital Age (6-1), and #8 Sacred Life (6-1).

It’s tough to swallow, but go six deep with the horses mentioned above, and try to survive this leg in the multi-race wagers heading into the Derby.

Use no more than 1, 2 or 3 horses on your multi-race tickets in the American Turf (race 8), Iroquois (race 10), Churchill Distaff Turf Mile (race 11), and Derby City Distaff (race 12), so you have enough money to spread your bets in the more wide-open spots like the Pat Day Mile (race 9) and the Turf Classic (race 13). This should cash you some doubles and pick 3’s, build you some bankroll, and keep your Pick 4 and Pick 5 tickets alive going into the Derby, where Tiz the Law looks like he’ll be extremely difficult to beat.