The Lineup: Whitney At Saratoga Tops A Saturday – And Night – Of Great Racing; Asmussen Poised To Set Record

There’s a little something for every kind of horseplayer on Saturday, from a 1 ½-mile turf marathon at Saratoga to the $500,000 West Virginia Derby (G3) to a pair of Grade 2’s at Del Mar, including a preview of potential West Coast 2-year-old stars in the Best Pal.

The biggest race of the day is the $1 million Whitney Stakes (G1) at the Spa (5:48 p.m. post), with a field of five top runners who, combined, more than $11 million in earnings (Slight favorite Knicks Go is the earnings leader at $3.48 million)

If you can’t make it to the track, you can simply wager and watch the action on TVG and “Saratoga Live” on Fox Sports’ FS2 from 12:30-7:30 p.m. ET. TVG will features races from around the country, including the West Virginia Derby, and the Best Pal and Yellow Ribbon, with post times of 9:06 p.m. and 9:36 p.m., respectively.

But before we get into the races, let’s note that on Friday (Aug. 6), Hall of Famer Steve Asmussen tied the late Dale Baird for most wins by a trainer in North America at 9,445. He won two races Friday, the second one at Ellis Park with Shanghai’s Dream in the sixth race to equal the record. 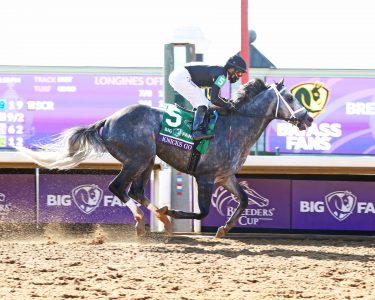 Knicks Go is the 6-5 morning-line favorite for trainer Brad Cox, while Maxfield (the No. 2 ranked horse this week in the NTRA poll) is 8-5 for trainer Brendan Walsh. Silver State, trained by Hall of Famer Steve Asmussen, is 4-1, Preakness-winning filly Swiss Skydiver is 4-1 for trainer Ken McPeek, and By My Standards is 10-1 for Bret Calhoun.

You may not hit the jackpot in this race since any of the five is capable of winning, but there are two pick 3’s involved in the Whitney – so choose wisely.

The other stakes at the Spa on Saturday are the Glens Falls (G2) at 1 ½ miles on the turf, the Test, the Whitney, and the Saratoga Derby Invitational.

Del Mar’s features are the Best Pal for 2-year-olds followed by the Yellow Ribbon for 3 and up fillies and mares on the turf.

Here’s a look at the fields:

The 51st edition of the Best Pal drew a field of seven, including Hall of Fame twiner Mark Casse’s Pappacap, the 8-5 favorite. Joe Bravo has the call leaving from post 3. Bet On Mookie is the 5-2 second choice

A deep 10-horse field is set, with last year’s winner Bodhicitta (6-1 back to try for another big win. With Trevor McCarthy aboard, the 5-year-old mare leaves from the rail. The slight favorite is Maxim Rate at 7-2 and carrying high-weight of 124 pounds with Juan Hernandez aboard. Charmaine’s Mia and Dogtag are both 4-1.

Bourbonic, trained by newly minted Hall of Famer Todd Pletcher, won the Wood Memorial (G2) back in April, then ran 13th in the Kentucky Derby (G1) and fifth in the Belmont Stakes (G1) in his last start. Eric Cancel has the call leaving from the rail as the 3-1 third choice.

A race drew a field of seven.

War Like Goddess, a winner in four of five starts, is the 8-5 morning line favorite in a field of seven. Trained by Bill Mott, War Like Goddess has not started since winning the Bewitch (G3) at Keeneland on April 23. Chad Brown-trained My Sister Nat, second by a length in last year’s Glens Falls, is the 3-1 second choice with Jose Ortiz in the irons. In her most recent start, My Sister Nat ran third behind Mean Mary in the New York Stakes (G2) at Belmont on June 4.

Search Results has won four of five starts, including the Gazelle (G3) at Aqueduct. She finished second by a neck to Malathaat in the Kentucky Oaks (G1), and then won the Acorn (G1) on June 5 over Obligatory. Irad Ortiz, Jr., rides.

Always Carina makes her fourth start on the turf. She finished second by 1 ¼ lengths to Zaajel in the Mother Goose (G2) at Belmont on June 26.

Bolshoi Ballet won the first leg of NYRA’s Turf Triple (Grade 1 Belmont Derby Invitational) and returns for the second in a field of 11. The 3-year-old trained by Aidan O’Brien is the 2-1 favorite and will be ridden by Ryan Moore.

O’Brien’s son, Joseph, will start State of Rest, who ran third in the Dubai Duty Free Celebration Stakes on June 26 at The Curragh. Hall of Famer John Velazquez has the mount.

While the race has a European flavor, American trainer Ken McPeek will try for a surprise with King Fury, winner of the Lexington Stakes (G3) and second in the Ohio Derby (G3).

This should be some race.

Knicks Go, winner of the BC Dirt Mile (G1) and Pegasus World Cup (G1), returned to the winner’s circle in the Cornhusker Handicap (G3) at Prairie Meadows last month following fourth-place finishes in the Saudi Cup and the Met Mile (G1).

“He’ll break running. We’ll see how far he can take himself around there, hopefully the whole way,” Knicks Go trainer Brad Cox said. “He’s set up for a big effort. He’s been working really well at Ellis.”

He may be on the lead, but there’s plenty of stiff competition in this five-horse field. Start with Maxfield, a winner in seven of eight career starts, most recently the Stephen Foster (G2) at Churchill Downs on June 26.

Silver State, a winner of six in a row including the Met Mile in his last start for Hall of Fame trainer Steve Asmussen, and By My Standards, second in the Met Mile, complete the field.

The winner earns a fees-paid berth in to the Breeders’ Cup Classic (G1) at Del Mar on Nov. 6 as part of the “Win and You’re In” challenge series.