Yonkers Raceway Horse Betting: The Rooney name has all but disappeared. It’s all MGM Resorts now, and lots of tinkering has taken place since ownership of Yonkers Raceway in Westchester County, New York, changed hands just over a year ago. 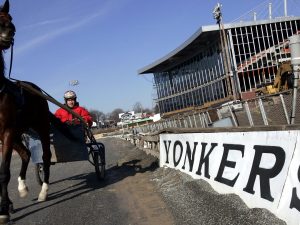 Nonetheless, despite new owners after a 47-year run by the Rooney family of Pittsburgh Steelers renown, new race names and a new post time, the venerable raceway is not much different. It remains home to the International Trot, two Triple Crown races (one for pacers, one for trotters), a bevy of top-quality stakes and, as usual, the highest overnight purses in harness racing.

Through the Rooney years, there were hard times and good times, and like many harness tracks in the 1990s, it appeared that Yonkers Raceway might go under. Thanks to the state of New York, racinos, and the determination of the Rooney family, the track survived and has at times flourished.

Even though most patrons flock to its Empire City Casino, the Rooney family always paid attention to racing. The track has played host to some of the finest races in the land — the Levy, the Petticoat, the Yonkers Trot, the Messenger Stakes and the Rooney Invitational.

In 2015, for example, they brought back the $1 million Yonkers International Trot after a 27-year hiatus. It may not be harness racing’s most prestigious race, but it may indeed be its most intriguing with 10 horses, representing anywhere from six to eight countries, trotting 1 ¼ miles for a big purse.

As soon as the MGM Resorts bought the track for $850 million (in cash) and stock, speculation began: Would the track close? Would it be moved? Would the new owners end the International Trot? Maybe less stakes races and less racing days?

MGM Resorts, after all, is not a family-run operation. It’s a corporate giant, with a bottom line of answering to stockholders. They could have easily cut major stakes races, and put some of the money into smaller events and overnights. Thankfully, that doesn’t seem to be the case.

For many who thought the expense of running the International Trot would bring an end to the race; MGM Resorts is pushing forward with it, but with its own branding – the $1 million MGM Yonkers International Trot on Sept. 12. It’s also the same day as the New York State Sires Stakes finals (eight races with $225,000 purses), as well as a pair of $250,000 invitationals, one for trotters, one for pacers.

The owners are putting their stamp on their new property, perhaps to the chagrin of traditionalists, re-naming races and canceling a few as well.

While the Blue Chip Matchmaker retains its name, the George Morton Levy Pacing Series for older horses has been renamed the MGM Borgata Pacing Series. The “Borgata” is a personal favorite — reliable, veteran pacers, and five events with the $200,000 final on April 18.

Two races, the Art Rooney Pace and Lismore have been canceled. While that is disappointing, they are the only two that were not renewed.

The other good news is the racing schedule itself. There are some that think companies like MGM Resorts want to reduce racing dates and run as little as

the state racing commissions require, but that isn’t the case at Yonkers. The track will race 237 times in 2020; mostly on Mondays, Tuesdays, Thursdays, Fridays and Saturdays with a new post time of 7:05 pm ET.

It might take some time to learn the new race names, but the news couldn’t be better — the International Trot is back, the stakes races are back and the new owners seem committed to keeping Yonkers a prevalent name in standardbred racing. And if you love harness racing that is indeed, happy news.

Register now with UsRacing.com, fund your account, get an amazing welcoming bonus, and get ready for all the Yonkers Raceway Horse Betting action!