Will Rogers Downs, Fonner Park Back On The Simulcast Menu

Before 2020, very few simulcasts paid much attention to Will Rogers Downs and Fonner Park, but that all changed during the COVID-19 lockdowns last spring. 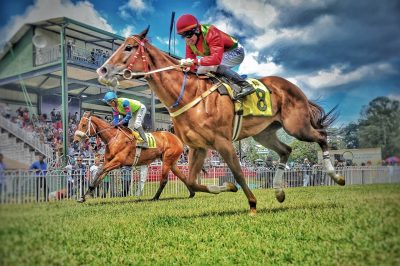 That’s when most racetracks almost everywhere were forced to close. The tracks that did continue to run like Gulfstream Park, Tampa Bay Downs, and Oaklawn Park raced mainly Thursday-through-Sundays. The “dark days,” meanwhile, Monday-through-Wednesday, were left almost completely barren until, thankfully for horseplayers, two tracks stepped in to fill the void. And they are tracks that probably were not previously on most horseplayer’s radars.

Those two Johnny-on-the-Spot tracks were Will Rogers Downs and Fonner Park, and it is with some affectionate nostalgia that we welcome back these two old friends to the current simulcast wagering lineup.

As we learned last year, if you are looking for some solid racing and wagering action, you can certainly do a heck of a lot worse than these two overlooked tracks. If you plan on making these two Midwest tracks part of your own simulcast menu again, here’s a brief handicapping overview of what to look for …

Located in Claremore, Oklahoma, at the Cherokee Casino in Cherokee Nation, Will Rogers Downs offers solid racing purses three days a week through May 26, with a post time of 1:10 CT – opening day was March 22.

Will Rogers conducts racing on a 1-mile traditional dirt oval with one-turn sprints primarily carded at 5 ½ furlongs and 6 furlongs, plus the occasional 5-furlong dash, and two-turn routes almost always run at 1 mile.

If you don’t normally play Will Rogers, the quality of the purses might surprise you. Most of the horses racing at Will Rogers in the spring had been running at Oklahoma’s other main track, Remington Park, in the fall.

Since purses at Will Rogers are competitive, it may not be a surprise that the meet attracts some prominent barns like Robertino Diodoro, who was leading trainer at Will Rogers in 2020 with 27 victories, and Scott Young, who had the same number of wins but a lower win percentage. Karl Broberg was a clear third in the standings with 24 wins, and his 59% ITM led all trainers. Steve Asmussen also had six wins from 53 starters. Other trainers to bet at WRD include Jon Arnett, who had an amazing 13 wins from 38 starters – a 34% win rate.

Located in Grand Island, Nebraska, Fonner Park will conduct live racing three days a week on Friday-through-Sunday. Last year, the track famously stepped into the simulcast void on Mondays, Tuesdays, and Wednesdays and picked up a lot of new fans in the process.

Fonner’s track layout is a classic 5-furlong bullring. One-turn sprints on the traditional dirt main track are run at 4 furlongs, and longer sprints are run around two turns at 6 furlongs and 6 ½ furlongs out of the chute. Route races at a mile around three turns are also carded regularly.

Most of the horses racing at Fonner come from other small Midwest circuits at other times of the year, including Columbus, Prairie Meadows, Horsemen’s Park and Remington Park. Some horses don’t handle Fonner’s bullring turns, but when you see good efforts at Fonner or another bullring already showing in a horse’s past performances, then it’s all systems go for many of these out-of-town invaders.

The most popular aspect of racing and wagering at Fonner Park in 2020 proved to be the “Dinsdale” Pick 5 Jackpot, which is a jackpot Pick 5 pool that accumulates enormous carryovers which then get distributed on designated mandatory payoff days when handle soars at Fonner. The Pick 5 Jackpot is back again for 2021.

In the trainer standings, there has been a turnover this season versus what was saw last year, when Isai Gonzalez and Kelli Martinez ruled the roost. This season it is David Anderson who is off to a hot start with a meet-leading 13 wins [21% win rate]. Martinez is having another big meet with nine victories so far, from much fewer starters than Anderson, accounting for 25% wins.

Schuyler Condon is off to an even better start with eight wins from the barn’s first 28 starters. Other high-percentage trainers from last year have been virtual non-factors this year, including Marissa Black, Steve Hall, and Salvador Arceo. Instead of that trio, bet horses now from barns off to red-hot starts at the meet including trainers Juan Chavez [3-for-3], Heath Lawrence [3-for-6], and Richard Dean Bliss [3-for-11].

The leading riders last season were Armando Martinez [70 wins] and Jake Olesiak [55 wins]. They are at it again: Olesiak has the early edge in wins, 21-17. Scott Bethke is the only other rider currently over 20% wins with a 15 from 69 mounts.