In the days leading up to the $12 million Dubai World Cup at Meydan Racecourse in Dubai, United Arab Emirates, on March 27, usracing.com will profile the contenders for the 2,000-meter (about 1 ¼ miles) race. The profiles will be updated with odds, post positions and jockeys following the post-position draw scheduled for Wednesday (March 24). 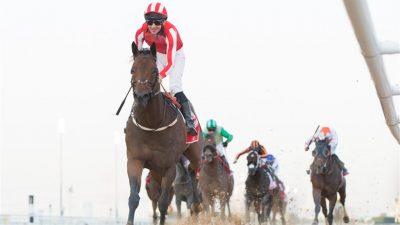 Salute the Soldier comes into the Dubai World Cup as the “now” horse and one with a distinct home field advantage after racking up consecutive graded stakes wins on this track and while stretching out in distance in the final two races in the Al Maktoum Challenge Series in his two previous outings.

“I expected the pace to be set from the outside, he jumped well, and the guys next to me didn’t want it so I was happy to lead,” jockey Adrie de Vries told the Thoroughbred Daily News after their G1 score last time out. “I got my own pace. He is just getting better, and he is so much fun. He is a great character, there is always something special about him. He didn’t want to go to the start today, he has his tricks in the morning as well. I think he still has got a bit left in the tank, he continues to improve, and I hope we have him spot on for the big day.”

Bahrainian trainer Fawzi Nass acquired Salute the Soldier after the horse’s former British owners closed out his career in the U.K. and put him up for bid in the Tattersall’s sale in the fall of 2019. He won first time out for his new barn and has found the winner’s circle four times in seven UAE tries.

“He showed us last year that he absolutely glides on the Meydan dirt, and distance wise he always showed he would stay a lot further. He was actually never built as a sprinter as you can see. Luckily, it paid off going the extra couple of furlongs,” said Nass after Salute the Soldier’s Group 1 win. “The horse is quite enthusiastic.”

The Dubai World Cup will be his rematch against several of the well-regarded horses he beat in his last two wins, including Hypothetical, Thegreatcollection, and Military Law.

Notes: In the 25th running of the DWC, Salute the Soldier has the chance to become the fourth winner of the Al Maktoum Challenge Series Round 3 (G1) to be victorious in both prestigious events … The three who have accomplished the feat are Electrocutionist (2006), Street Cry (2002) and Dubai Millennium (2000). Street Cry is Salute the Soldier’s maternal grandsire … The owner, Victorious, is based in Bahrain and the trainer hails from the Gulf State monarchy … Nass won a Group 1 race with the first horse he saddled in the UAE when Krypton Factor took the $2 million Dubai Golden Shaheen on 2012 Dubai World Cup night … He also had a training base in England and has won the Bahrain Derby and the Bahrain Oaks … Salute the Soldier is yet another of the former British turf and all-weather track horses who were sold to Middle Eastern connections and found glory after switching to dirt tracks.