Grade 1 winners Ce Ce, Ollie’s Candy, and Hard Not to Love are among six talented distaffers entered for Sunday’s $250,000 Clement L. Hirsch (G1) at Del Mar, with the winner earning an automatic berth into the Breeders’ Cup Distaff (G1) at Keeneland in just over three months.

The Del Mar weather continues to be beautiful and the afternoon high is expected to reach the low-80s, guaranteeing another day with a fast track. The 1 1 /16-mile Hirsch is the 10th race with a post time of 6:30 p.m. PT. 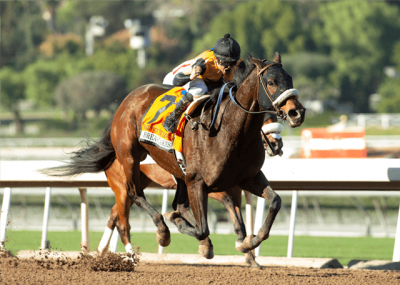 Hard Not To Love – Courtesy of Benoit Photo

The Clement L. Hirsch was once known as the Chula Vista Handicap, renamed in 2000 to honor Clement Hirsch, the man who founded the Oak Tree Racing Association the year he passed away. A superstar list of distance fillies and mares have graced the Del Mar winner’s circle after capturing this race, including champions Princess Rooney, Bayakoa, Paseana, Sharp Cat, Azeri (twice) and Zenyatta (three times). Champion Stellar Wind won this race two years ago for the second time and Eclipse Award winner Unique Bella ran her final career race in this event a year ago.

Trainer John Sadler has saddled a record five winners (going for six with Ollie’s Candy), one more than the legendary Charlie Whittingham, to lead all others as the race’s leading conditioner. Retired Hall of Fame jockey Chris McCarron earned seven Hirsch trophies to lead all riders.

Ce Ce is owned and was bred by Bo Hirsch, the son of the man the race is named after, and is a daughter of Elusive Quality. The 4-year-old makes her return after her first loss of the year in the Santa Maria Stakes (G2) at Santa Anita at the end of May.

Before that, the Mike McCarthy trainee won three in a row, including the Beholder Mile (G1) and Apple Blossom Handicap (G1), where she defeated a couple of her rivals in here. She has the capability to post big triple-digit speed figures and she’ll need to here, and jockey Victor Espinoza has a filly he can send if he needs to or ask her to sit off the pace depending on how fast it is up front. Her last wasn’t bad and if she returns to old form, she’s a good bet for the win.

Back to defend her title from a year ago is Paul and Karen Eggert’s Ollie’s Candy, who hasn’t actually won a race since this one last year but who has placed in four graded stakes, three of which are Grade 1’s. She returns off an impressive third, beaten a length by good fillies She’s a Julie and Point of Impact in the Ogden Phipps (G1) seven weeks ago.

The Sadler-trained filly has been impressing with her morning works and gets the services of hot jockey Flavien Prat again. The daughter of Candy Ride is a stalker and most likely will sit just off the pace, and if she posts anywhere near her average speed figure is a leading candidate for the win.

West Point Thoroughbreds and Mercedes Stables’ one-eyed wonder Hard Not To Love returns off a pair of seconds in graded stakes company in her past two races.

The Hard Spun filly, who won the La Brea Stakes (G1) at the end of last year, is temperamental, mostly due to her sight issues, and her performances may have suffered because of it. But make no mistake, when she’s focused she’s as good as any. Her only hiccup may be that she seems to prefer a little less ground and may be in a little deep in this field, all things considered. Trainer John Shirreffs, who has saddled four previous winners of this race, will give a leg up to regular rider, Hall of Famer Mike Smith.

Gary and Mary West’s homebred Fighting Mad returns off an impressive wire-to-wire score by 3 ½ lengths in the Santa Maria at Santa Anita that earned her a huge speed figure, but also signaled her intentions in the distaff division this year. The daughter of New Year’s Day owns raw speed and can carry it at a route, which she will surely do with a clean break under Abel Cedillo. It will be a difficult task for any of her rivals to run her down before the wire.

Dogtag seeks a third straight win and first in graded company after winning the grassy Possibly Perfect Stakes last time out at Santa Anita in mid-June. She has a Hall of Fame trainer in Richard Mandella steering her career now, but it’s a bit of a head scratcher as to why she’s trying dirt after such a successful turf career so far.

Hang A Star makes a big jump up in class here and may grab a piece with her best.