I get all kinds of emails and messages on social media from US Racing’s readers. I get folks that love to share memories of their favorite moment in racing history. I have people that want to pick my brain on pace or how to create their own figures. I get some people telling me that I am a joke.

One memorable reader recently reached out to me on Facebook and demanded that I send him my system for picking contenders. He was insistent that he would even give me $100 for what I used to pick the races. I couldn’t help but respond to such a fine offer. When I did respond I let our friend Demanding Don know that my “system” was still a work in progress and was by no means a finished product that required no further work. His last response to me was to reach out to him when I was done and, of course, how much longer will that take. 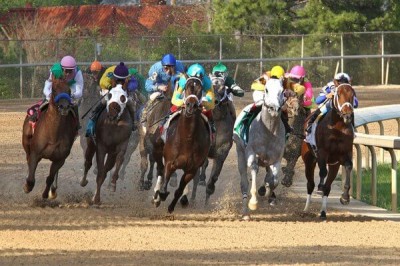 I responded that I had no timeline since my handicapping approach is in a state of “perpetual beta.” As expected, Demanding Don responded with some expletives calling me a fraud and a horrible handicapper.

I couldn’t help but laugh at his response. Every successful handicapper, whether they are a part-time player or they make their living at the track, is always working on their game. They follow a process that you will find in business texts and many other books that will give you are formula to continuously improve your handicapping.

Think about that amazing recipe your grandmother passed down for her Sunday sauce. How many times do you think that she tried making it before she got it right? How many times do you think she had to adjust the ingredients when she couldn’t get her favorite blend of spices or can of crushed tomatoes? You can picture Nonna standing in front of her favorite pot wearing that stained house coat as she experiments her way to perfection in front of the stove.

Handicapping is no different.

Seventeen years ago I set out to improve upon my own homemade speed figures. It wasn’t that my speed figures were bad, they weren’t discounting any horses for pace. I had the desire to create a pace based speed figure that would reward horses that faced tough paces and penalize horses that couldn’t handle a hot pace.

It seemed like an overwhelming task since there are so many factors that determine the pace of any given race – fractional times, other horses, surface or track bias, class, form, and luck. I tracked separate factors, looked for correlations between factors, and collected as much data as I could.

I pieced together the promising criteria and adjustments based on the data I had collected. I was ready to start tracking races and seeing how my new figures perform in real-time.

This step is simple. You won’t make any progress unless you try something new.

Was I rewarded the months I poured into my pace based speed figures?

For all the hours and late nights I put into these new figures they were a total bust. A blindfolded-dart-throwing-chimpanzee could have picked better contenders. However, this is a critical juncture in the process. Losing handicappers quit at the first sign of failure. Winning handicappers work to overcome these setbacks.

The failure of my newly minted pace based speed figures forced me to analyze their performance. Was there a common factor that I was relying too heavily upon or not heavily enough? Was I still allowing speed to play too big of a role in my overall figures?

I had handicapped hundreds of races – turf, dirt, sprints, routes, maiden claimers, and elite stakes races. I looked at my results in every way imaginable. I sorted by distance, class, surface, running style of the winning horse, and performance of entrants against the actual and projected pace. I started to notice some trends. I knew I had to tweak how I adjusted some of the factors I was using to modify off of my base speed figures.

I started tweaking my figures. I went back into the banker’s boxes of old racing forms and past performances I had kept to adjusting some of the factors in races already in my data set. (Realize that in 2003, we weren’t as digital as we are today.) I also added new races to my data.

When I checked the latest results against my previous results, I saw some improvement. It wasn’t enough for me to quit my day job, but the gap towards profitability was shrinking and the factors were hitting on a much more consistent basis. From all the data I had also learned what type of races the figures were most vulnerable in – turf routes. Even with quality par times, the call times on turf races vary greatly making it hard to use fractional times. This forced me to use other factors and figures when assessing turf routes.

This is the hardest step for many handicappers. They are reluctant to let go of that angle or factor that worked for them for so long. They feel like they owe it to that angle to keep it around. Winning horseplayers know when to cut their losses.

You should not settle for your angles or figures being “good enough.” Winning handicappers strive for continual improvement. After you adjust, you continue through the cycle. Try again, fail again, analyze again, adjust again, and so on.

You will never have a finished product that you can click a box and have a winning horse to play. The game is constantly changing and as horseplayers, we must change with it. Don’t get discouraged if something doesn’t work, trust in the process and follow the cycle through over and over again. Your bankroll won’t care how you are making money or that your handicapping is stuck in “perpetual beta.”