Flavien Prat by one; Irad Ortiz, Jr. by one.

From Del Mar to Saratoga, the summer season ended on Labor Day (Sept. 7), and the race for leading jockey at each meet went down to the wire.

At Del Mar, Where the Turf Meets the Surf, Prat came through with a victory aboard Dr. Schivel in the $250,000 Del Mar Futurity (G1) in the penultimate race of the meet and edged newcomer Umberto Rispoli for the title, 50-49.

At the Spa, the Summer Place to Be, it was brother versus brother once again, with older sibling Irad Ortiz, Jr., nosing out Jose Ortiz 59-58 thanks to a 2-1 edge on Monday. 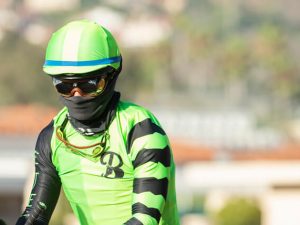 For Prat, it was the fourth Del Mar riding title he’s won or shared in the past five years; Rispoli was making his Del Mar debut. In the past six Spa seasons, Irad and Jose have each won three riding titles.

Prat trailed Rispoli by one heading into the final day, but won the seventh race to pull even and clinched the title with the Grade 1 win. Rispoli was blanked on the day.

For Irad Ortiz, the clincher turned out to be the fifth race on a 14-race card at the Spa on Monday. The brothers started the day tied at 57 wins apiece. Irad won the third; Jose won the fourth; and Irad won the fifth aboard Per Capita. Jose had a chance to tie, but finished fourth aboard Mohiestic in the final race of the meet.

Let it be noted that Irad missed three days of the Spa meet with a wrist injury in late August.

“It’s very special. My agent [Steve Rushing] did a great job and I’m very thankful for all the trainers and owners, without them I would not be here,” Irad told the NYRA press office. “After my injury, I had to take off a few days and they still named me on their horses and gave me the confidence and the opportunity.”

The Ortiz brothers and Prat — among the top eight jockeys in the nation — remained at their home tracks rather than ride in the Kentucky Derby (G1) on Sept. 5 based primarily on loss of business due to COVID-19 travel and quarantine restrictions.

“It’s great, very rewarding for the whole team,” Pletcher said. “We had a lot of people put a lot of hard work into it, and, yeah … it’s very satisfying. The horses were running well, but I didn’t anticipate that having as good a meet as we did. I didn’t think we’d have as many babies ready.”

Peter Miller picked up his fourth Del Mar summer training title to go along with the number of fall championships he’s had there. Miller saddled 28 winners from 116 starters, an eight-win margin over Phil D’Amato and 13 over third-place Bob Baffert.

Handle strong at both tracks, despite no spectators

Also run with no spectators, and running 25 percent few race days than 2019, Del Mar completed its summer season with an 8 percent total wagering increase from 2019.

“Given the extraordinary circumstances, we are very pleased with our results. The racing product was first-rate and players around the country responded in-kind,” said Del Mar Thoroughbred Club’s CEO, Joe Harper. “It is especially gratifying that we were able to achieve positive business results while maintaining our commitment to the health and safety of our workforce and our neighbors despite the obvious challenges.”