Tips and Trends for Winning at Oaklawn Park

Some of the country’s top winter dirt racing has already begun in the Midwest with the opening of the Oaklawn Park meet last week. The meet added 10 racing days to boost its winter run to 66 racing days through May 8.

Oaklawn boasts big fields, strong purses, and good betting races. The day-to-day racing at Oaklawn should be a point of focus for handicappers for the winter racing season. Thanks to gaming revenue from Oaklawn’s casino, purses at the Hot Springs, Arkansas track will be the highest in the country this winter.

Another change is Oaklawn will race three days a week, Friday-Sunday — instead of four days a week. The showcase day of the meet is Arkansas Derby (G1) Day on April 2 – five weeks out from the Kentucky Derby (G1).

The dates of Oaklawn’s lucrative 3-year-old series were changed to accommodate the new schedule. The Smarty Jones is set for Jan. 1, followed by the Southwest (G3) on Jan. 29 and the Rebel (G2) on Feb. 26.

Oaklawn, which has no turf course, runs most its races at three distances, 6 furlongs, 1 mile, and 1 1/16 miles. The dirt track is a 1-mile oval with two different finish lines – the traditional finish line, and an alternate finish line at the 16th pole which serves as the finish for mile races. The second finish line has made a significant difference for Oaklawn handicappers in 1-mile races, raising the overall success rate for middle posts and making outside gates nearly equal to inside posts, which in the past always was advantageous nearly all the time in Oaklawn routes.

To get a handicapping leg up at the meet, let’s start by looking at some post position biases. There has been a noticeable outside flow to many of the Oaklawn races the past two seasons, particularly in sprints and at 1 1/16 miles. In those races, outside paths were preferable on many days. It wasn’t uncommon to see exactas like 12-11 or 8-9. Outside trips can thrive at the meet, apart from the 1-mile distance so those outside runners are no longer handicapping toss outs like they might have been in past years.

The Oaklawn routes have played differently at the distances of 1 1/16 miles and at 1-mile (alternate finish line). In 1 1/16-mile routes, horses from inside, middle, and outside draws have had similar win percentages. We also saw this in 6-furlong sprints. This is key, because outside horses in Oaklawn two-turn races tend not to get bet as much. This means there are plenty of outside-drawn bargain overlays to be found in 1 1/16-mile races. 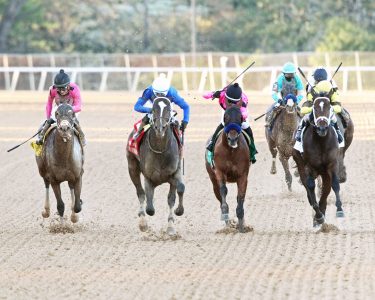 In the post position stats for 6 furlongs, horses from all parts of the starting gate all the way out to post 12 have won at similar percentages, indicating the track played fairly in sprints. This reality is another blow to the chances of horseplayers who only bet inside horses at Oaklawn from their bygone years of mental conditioning telling them that outside posts never win at Oaklawn. The stats tell the real story. However, they show no real bias between inside, middle, and outside draws at 6 furlongs. Horses from inside posts 1-4 won at an average of 12% each. Middle posts 5-8 won at an average of 10% apiece. Horses from outside posts 9-12 won at an average of 10% each.

Now let’s switch to running style preferences. The Oaklawn winning profile for years indicates that early speed horses and pressers that race on or within two lengths of the lead have the preferred running style at each of Oaklawn’s three most commonly-run distances, 6 furlongs, 1 mile, and 1 1/16 miles.

This is likely due to the 1-mile Oaklawn track layout and relatively short stretch-run compared to other tracks (with an even shorter stretch-run at a mile).

There are now more than five months of great racing at the Oaklawn Park meet, so don’t overlook this high-quality winter/spring season. Factor Oaklawn’s prevailing biases into your handicapping, and you will have a big advantage over many of your fellow horseplayers.  Best of luck and enjoy the meet at Oaklawn!