The Lineup: Is There Another Rombauer At Golden Gate Fields?

A year ago, Rombauer rallied in the stretch and won the El Camino Real Derby at Golden Gates Fields, earning not only qualifying points for the Kentucky Derby but something that turned out to be more important: an automatic berth into the Preakness Stakes. 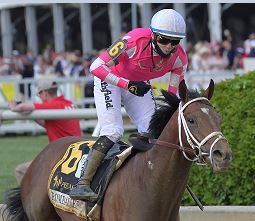 With that, owners John and Diane Fradkin, decided to skip the 2021 Derby on May 1 and go for the Preakness two weeks later. Trainer Michael McCarthy made an unsuccessful pitch to Run for the Roses, but who could argue with the result?

Rombauer delivered a huge stretch run in the Preakness and blew past Derby winner Medina Spirit and Midnight Bourbon for a 3 ½-length victory at 11-1 odds.

It was a first Triple Crown race win for the owners and the trainer.

John Fradkin had explained he thought Rombauer’s running style fit the shorter-distance Preakness over the Derby and there would be a less crowded field and not-as-tough competition.

“I believe in running the easiest spots as possible,’’ he said.

And so here we are again – the $100,000 El Camino Real Derby on the synthetic Tapeta surface is Saturday, with Derby qualifying points of 10-4-2-1 to the first four finishers and a guaranteed berth in the Preakness to the winner.

Is there a Rombauer among them?

A son of Triple Crown winner American Pharoah, MacKinnon ran fourth in the Sham (G3) at Santa Anita in his 3-year-old debut but put together a 5-3-1-1 record as a 2-year-old, including wins in the Del Mar Juvenile Turf Stakes and the Zuma Beach Stakes, and a third in the Breeders’ Cup Juvenile Turf (G1).

Here’s a look at a few more Saturday’s stakes races:

Howling Time, trained by Dale Romans, is the 5-1 third choice in the large field, with Classic Causeway the 3-1 top choice and unbeaten Make It Big at 9-2.

“It’s a good Derby prep race, the timing is good, and our horse is healthy and doing everything right,” Romans said. “It’s a good race to get your horse to the next level, and it’s a great race to win on its own. But we are looking down the road.” 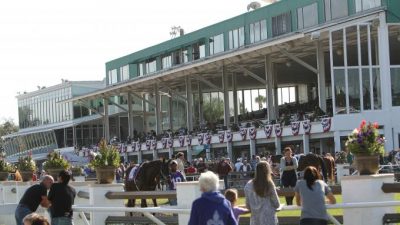 Joe Talamo will be aboard leaving from post 9. Howling Time won the first two starts of his career, and then ran fifth in the Kentucky Jockey Club (G2) to close out his 2-year-old campaign.

“I’d like to see him get his first graded-stakes victory and keep picking up Derby points,” Lynch said. “His workouts have been solid, and everything about them suggests he should run well.”

Make It Big, trained by Saffie Joseph Jr., comes into the race with 10 Derby points after winning the Springboard Mile at Remington Park on Dec. 17. He’s 3-for-3. Jose Ortiz will ride from post 7.

Nest is the strong 3-5 favorite in a field of eight fillies in this Kentucky Oaks (G1) qualifier that offers 10-4-2-1 points to the first four finishers.

Trained by Hall of Famer Todd Pletcher, Nest is 2-for-3, including a victory in the Demoiselle (G2) at Aqueduct on Dec. 4 in her previous start. Irad Ortiz, Jr., will be aboard this daughter of two-time Horse of the Year Curlin.

Alittleloveandluck is the 5-1 second choice.

Coach is seeking a third win in a row and comes into the race off a two-length allowance win at Oaklawn on Dec. 17.

“Obviously, Coach loves Oaklawn,” Cox said. “She’s better than she’s ever been. She always tries hard. She’s very competitive. Obviously, it’s a step up. The way she’s training, I feel like she can step another step forward. It will be her third run off the layoff, so I’m excited about her.”

Queen Goddess was a front-running winner over the American Oaks (G1) at Santa Anita on Dec. 26. The race was moved to dirt from turf and was her first race over the surface after five starts on turf.

“Looks like on paper she should be right there, with a little bit of speed outside of her,” McCarthy said. “The controlling speed looks to be inside, so David can get himself into a good position going into the first turn and let the chips fall as they may.”

Two-time Grade 2 winner Lone Rock is the 3-1 morning-line favorite in a field of nine.

The race sets up to be a contentious one with Plainsman the 7-2 second choice, Promise Keeper at 4-1, and 2021 Arkansas Derby (G1) winner Super Stock at 9-2.

Todd Pletcher trains Promise Keeper, making his first start in 7 ½ months, and is looking for a record-tying fifth win in the Razorback.

“He ran a hard race in the Ohio Derby (fourth, but only a length back from the winner),” Pletcher said. “He was kind of under pressure from the rail the whole way. So, he came out of that, and we gave him a little bit of time. Just felt like he wasn’t training as well after that as well as he was prior to it. Got together with the ownership group and we decided to give him some time off, with the idea that he would have a big 4-year-old year.”