A multiple Group 1 winner in Argentina, The Great Day has come up short in his first two starts in the United States. On Saturday, perhaps the third time is a charm when the 5-year-old owned by Lael Stables takes on eight rivals in the $250,000 Del Mar Handicap (G2) on the turf.

Post time for the race, which precedes the $1 million Pacific Classic, is 5 p.m. PT.

Bred in Argentina, The Great Day finished fifth in the Prince George’s County Stakes at Laurel in his U.S. debut, and then ran second in the Arlington Handicap (G3) on July 13. Shipped out to the West Coast, The Great Day is the 5-2 morning-line favorite for the 1 3/8-mile “Win and You’re In’’ race, with the winner gaining a berth in the Breeders’ Cup Turf (G1) at Santa Anita on Nov. 2 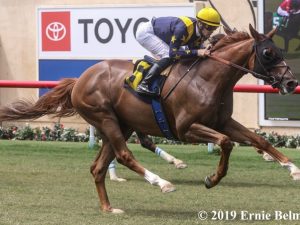 The horse, a son of Harlan’s Holiday, is trained by Arnaud Delacour, who has had success when shipping from his East Coast base. The Great Day will be ridden by Hall of Famer John Velazquez, with regular rider Flavien Prat opting to stay aboard United, the 3-1 second choice in the field.

The Del Mar Handicap is one of the oldest stakes races conducted at the seaside oval. It boasts a list of winners that includes Native Diver, Quicken Tree, Ancient Title and Precisionist.

LNJ Foxwoods’ United is back in stakes company after winning an allowance race on opening day at Del Mar rather easily. The Giant’s Causeway gelding, trained by Richard Mandella, was previously second in the Charles Whittingham (G2) at Santa Anita behind Marckie’s Water, but clipped heels on the dirt crossover and though rallying from well back, was passed easily in deep stretch. The extra furlong should be of little concern despite the jump back up in class. 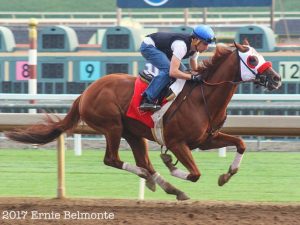 Marckie’s Water looked fantastic when unleashing his tremendous turn of foot to win the Whittingham and came back to log a troubled third in the Eddie Read (G2) on opening day. Since his uncharacteristic last-place finish in the Unusual Heat Turf Classic for California-breds in January, this Little Red Feather and Norman Tavares-owned son of Tribal Rule has had a good year, winning two with a second and a third in stakes and allowance company for trainer Richard Baltas. He’ll be rolling late under Tiago Pereira and his rivals will be hard pressed to hold him safe.

Baltas also sends out Oscar Dominguez, who he claimed from Peter Miller for $40,000 in February and who has been claimed two other times in the last year for mid-five figures. Since then the Irish-bred Zoffany gelding has an allowance win and a second in the San Juan Capistrano (G2) to Acclimate last out. Joe Talamo picks up the mount.

Red Baron’s Barn LLC’s multiple Grade 2 winner Itsinthepost has had almost as many layoffs as races recently, and after 10 months off from last summer to this June, returned to finish last of 13 in the Wise Dan (G3) at Churchill Downs. But he redeemed himself nicely for a second in the Cougar II Handicap (G3) three weeks ago. Now making his third start off the layoff, the Jeff Mullins-trained son of American Post may be returning to top form. Drayden Van Dyke will be back aboard.

San Juan Capistrano winner Acclimate has had most of his success in allowance company and won’t get an easy lead to steal a win. Florent Geroux rides for Phil D’Amato, who has saddled the winner of this race in four of the past five years, including the last two.

Ritzy A.P. was third in the Eddie Read for the owner/trainer combo of Calumet Farm and Dan Blacker. The English Channel horse has some stakes placings and decent allowance wins, but has struggled somewhat in graded company overall. Martin Garcia will be back aboard.

Dual Grade 3 winner Blended Citizen was a pretty good sophomore, but was sent to the sideline last summer and has struggled in three turf starts since returning to action. It’s hard to imagine the son of Proud Citizen will be much of a factor, but we should all know to never leave a Doug O’Neill trainee out of consideration. Aaron Gryder will be aboard.

Arizona Moon ships in from Arizona and seems in a bit deep against this field.