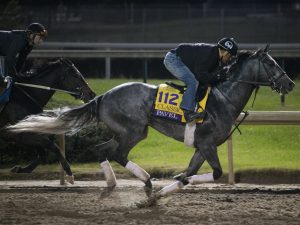 While most eyes will be fixed on Del Mar for the Pacific Classic and its supporting stakes, the “best bet” this weekend is undoubtedly the first mandatory payout of Saratoga’s Empire 6 on Sunday. With an affordable base and very low effective

takeout on force-out days, these are the type of wagers I live for, especially when paired with the quality racing Saratoga provides. I would, however, be remiss to not at least mention the Pacific Classic, which drew a fun and competitive field. My top pick is Pavel, who I’m not sure has moved up with the addition of blinkers but has perhaps become more consistent, as in the past he’s had a tendency to pop up with a big race then fade into the background for a while. I thought each of his last two races were much better than they look as he endured wide trips against rail biases in both, and although he’s yet to win at 1 ¼ miles I’m confident he can handle the distance. At a much larger price I’m interested in Mongolian Groom. He looks a tad slow on paper but I think he may have taken a subtle move forward with the addition of blinkers. He nearly ran down Catalina Cruiser, who had the benefit of setting a leisurely pace, at a distance probably shorter than his best. The stretch-out back to a mile and a quarter should agree with him and he’s going to be overlooked in the wagering.

As is the case with most maiden races that kick off multi-race bets, watching the board will be imperative. I don’t think much of the runners with experience in this field, but none of the first-timers really jump off the page either. Wedontbelieveher ran the fastest race last out and showed some grit in the lane, but she pressed a pretty leisurely pace for the distance and now must deal with a negative trainer change. Palace Avenger is probably the one I’m most interested in who has run. Wesley Ward doesn’t wheel horses back often on such short rest but when he does they’ve run quite well. This filly has plenty of early speed and the slight turnback should agree with her. Given the dearth of proven form to latch onto in here and the amount of capable trainers sending out firsters, the tote board is likely to provide the best road map to navigating this race. As it stands now, the more horses you can afford to use the better.

Unlike the prior maiden race, this one appears to be more straightforward. There are two main contenders exiting the same race on July 19, and although only a nose separated them at the wire, one clearly stands out as being a cut above. Mrs. Danvers was sent off the favorite in that race and ran to her backing despite finishing third. She lunged at the start and lost at least a few lengths, rushed up into contention down the backstretch, went wide around the turn and stayed on well while running a bit greenly through the stretch. It was a very encouraging effort and with a cleaner break she should be able to handle this field unless one of the firsters can really run, which on paper seems unlikely. While I think Mrs. Danvers will be tough to beat, I certainly don’t discount the chances of Finite, who finished ahead of her last time. This filly ran well pressing a pretty quick pace and was put in an uncomfortable position between horses leaving the turn but stayed on well in the stretch. The Asmussen barn has been firing on all cylinders at Saratoga and it’s not difficult to envision her taking a step forward in her second start. She probably deserves more than just “backup” status, but I do have a clear preference for Mrs. Danvers. Most of the firsters give the impression that this race is a stepping stone for longer assignments down the road, but Water White and Abilene Road look like they might be primed for solid efforts in their debut.

The drop is somewhat of a concern, but I really like the chances of New York’s Finest in this race. He didn’t break sharply in his last start and was shuffled to midpack down the backstretch. From there he got a good trip and stayed on well to close a bit of ground through the stretch. I didn’t think the race was spectacular on its own merits, but I do think it’s particularly noteworthy because he had previously shown a distaste for softer turf and an inability to overcome any kind of adversity. Within the context of his career, I think it’s one of the better races he’s run, and the circumstances figure to be much more favorable for him on Sunday. Fear is clearly good enough to win but he doesn’t have as much of an excuse as New York’s Finest for his last race. Unlike his main rival, he has a proven track record over turf with some give to it and I don’t think the pace he pressed last time was all that taxing. He can certainly bounce back but he’s been very inconsistent since the Englehart claim, though I suppose it’s a good sign he’s able to string together two starts in a row. At a bigger price, I’m also going to give Macho Blue another chance in New York. There isn’t terribly much speed signed on for this race and he could find himself on the lead if New York’s Finest doesn’t break alertly. Mertkan Kantarmaci is having a quiet meet but he proved earlier in the year that he can be potent on this circuit.

Connectivity and Keota are likely to attract the most support in this race and while I’ll be using both, I do have my reservations. The former trounced a weaker field last time and now leaves the barn of Chad Brown (though Linda Rice is no slouch), while the latter got a cake trip in her last turf start and was a complete no-show first off the claim for Jason Servis. I think many will draw a line through that race because it came on the wrong surface, but she’s at least handled dirt in the past so the total non-effort is troubling. Joy of Treasure is certainly a player as well but she got a terrific setup in her last race and it doesn’t feel like the turnback to a mile will be doing her any favors, though she should get some pace to run at. The filly that interests me most is Hit a Provisional, who came off a long layoff to nearly beat New York-bred competition in her last start. I thought she ran well in that race pressing a solid pace, and unlike Joy of Treasure I do think the cut back to a mile will suit her. She should be able to work out a good trip just off the speed. 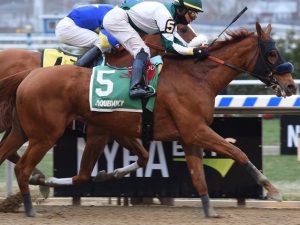 Blue Prize is going to be a heavy favorite in this race and I don’t see many reasons to take a significant shot against her. She’s run consistently faster than the fillies and mares she’ll meet in this field while facing vastly superior competition and the distance will be no problem for her. That said, I do get the feeling she’s going to be overbet and could be set to disappoint over a track that’s infamous for such upsets, so I’d like to have at least one “main” alternative. Pacific Wind is the obvious candidate to pair her with, however I also get the sense she’s going to be overbet considering people have a natural tendency to gravitate to Chad horses in these situations. I don’t particularly care for any of the races she’s run lately and I also have doubts that she’s at her best going two turns, so I’ll only be using her defensively. The filly I like at a price is Alberobello. She really appreciated the stretch-out to a mile and an eighth over this track last year and I thought she ran a terrific race in her 2019 debut despite facing only two other runners. I’ll give her a chance to rebound after burning a ton of money in the Lady’s Secret at Monmouth. I also wouldn’t discount Vexatious in this spot. She actually began her career running on dirt and really wasn’t too bad over it, though it’s likely she has a preference for turf.

Take Charge Tina figures to be a formidable favorite in this race. She patiently tracked quick splits in her first turf start and stayed on well through the stretch as the pace fell apart a bit late. It was a solid effort for the level, but I’m not willing to just concede the race to her. I know her recent form is atrocious, but I’m going to give one more shot to Fairy Link. This filly ran races last year that would demolish this field, particularly one over the Saratoga turf, and I’m willing to excuse her last as I don’t think she wants any part of 5 ½ furlongs. There are clearly issues with her, however I think it’s a good sign she’s able to string races together now and the price should be inviting. O’Malley is a bit of a wildcard in here and one I think merits serious consideration. She’s yet to run an especially fast race, but she gets some positive changes for this race including a switch to the Mike Maker barn, Jose Ortiz aboard, and the addition of blinkers. Presque Isle form is always a tough read, though I think it’s safe to say she’s taken a step forward as a 3-year-old and should appreciate getting back over turf. There’s no doubt Moyne Spun had a rough go of it last time, but I think the trouble she had may be overblown. Ultimately it felt like she just wasn’t good enough, though she’s certainly not without a chance in this spot in her second start for Brad Cox.