The Farrell Report: Another Triple Play of Derby Preps Ahead

There were upsets along the road to the Triple Crown as three horses delivered victories Saturday that moved them squarely into Kentucky Derby (G1) contention.

Known Agenda, Rebel’s Romance and Like the King each picked up 100 qualifying points with their wins, more than enough to secure a spot in the Derby starting gate. 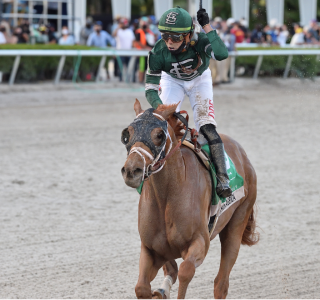 And what will this week bring? Another trio of 100-point races Saturday in a coast-to-coast extravaganza: the Santa Anita Derby (G1), the Wood Memorial (G2) and the Blue Grass (G2). Will we affirm the standing of several of our leading contenders, or should we prepare for more uncertainty?

Baffert down but not out

Hall of Fame trainer Bob Baffert might be feeling a bit down after losing Life Is Good to an injury and seeing Spielberg run poorly Saturday in the Florida Derby (G1).

If we’ve learned anything in recent years, it’s you never count Baffert out. He has the knack of always pulling another ace out of his sleeve.

We’ll see if the magic continues in the Santa Anita Derby where Baffert saddles Medina Spirit, a two-time runner-up to Life Is Good.

With his undefeated stablemate on the sideline with a chipped ankle, Medina Spirit can step into the spotlight. There is no better spot to try than in the Santa Anita Derby, a race Baffert has won a record nine times.

Baffert, who has another unbeaten colt on the Derby trail in Rebel (G2) winner Concert Tour, keeps relentlessly moving up the all-time lists. Since 1976, D. Wayne Lukas holds the record with 219 Grade 1 victories. Baffert is now only one behind.

Excluding the Oak Tree meet, Baffert has won 896 races at Santa Anita. It’s only a matter of time before he surpasses the late Bobby Frankel, the current leader with 917.

The Great One looks to rebound from a fifth-place finish in the San Felipe Stakes (G2), reporting home some 17 lengths behind Life Is Good after getting knocked around at the break.

“We’re real happy with The Great One and think he can rebound and run a big race,” trainer Doug O’Neill said.

O’Neill already has a solid Derby horse in Hot Rod Charlie, the dominant winner of the Louisiana Derby (G2) who will train up to the Derby.

Wide open Wood at the Big A

On the opposite coast, Aqueduct presents the Wood Memorial with Gotham (G3) winner Weyburn among the leading choices.

The race is also expected to lure Candy Man Rocket, who needs a drastic improvement on his 11th place finish in the Tampa Bay Derby (G2) to stay in the Derby hunt. Also pointing to the race are Brooklyn Strong, Capo Kane, Crowded Trade, Dynamic One, Nicky the Vest, Prevalence and Risk Taking.

The champ tunes up: Essential Quality headlines the Blue Grass

The Breeders’ Cup Juvenile (G1) and Eclipse Award champion Essential Quality puts his four-race undefeated streak on the line in the Blue Grass.

With Life Is Good injured and Greatest Honour losing the Florida Derby, Essential Quality now stands as the horse to beat in the Derby.

That perception could change drastically, depending on how he performs at Keeneland.

The Blue Grass will also lure Rombauer, the El Camino Real Derby winner who is bypassing the close-to-home Santa Anita Derby in favor of this spot.

The right Ortiz brother made the difference

The Florida Derby was a tale of the two very talented Ortiz brothers.

Irad Ortiz, Jr. guided Known Agenda to victory with a perfect trip, putting the colt and trainer Todd Pletcher squarely in the Derby.

It was a banner day for the three-time Eclipse Award winning rider. The victory was his 138th of the Gulfstream Park “Championship Meet”, passing the mark of 137 held by Luis Saez.

Ortiz accurately read the pace, and had his horse ideally positioned.

Can’t say the same for brother Jose on beaten 4-5 favorite Greatest Honour. The horse never looked comfortable, spending too much time bottled up on the fence and didn’t have his usual closing punch when finally freed from traffic.

“I tried to be aggressive, but I wasn’t fast enough to make it into a nice position, so I had to take him back and drop in,” Jose Ortiz said. “Actually, I had Known Agenda in front of me and I followed him the whole way. At the three-eighths pole I kept following him. I felt like I was in contention at the quarter-pole, but the winner ran a nice race. He was the best horse today, but we’ll turn the tables on them on Derby day, that’s for sure.”

Wesley Ward has first Derby starter with Like the King

Ward, the former Eclipse Award winning jockey turned trainer, will make his Derby debut after Like the King survived a foul claim from runner-up Sainthood to win the Jeff Ruby Stakes (G3) at Turfway Park.

Now part of the Churchill Downs family, Turfway’s premier event was bumped up to the 100-points-to-winner level this year for the first time.

How should we view Like the King? Let’s call him a major Derby question mark.

He has three wins; two over the synthetic surface at Turfway and one on the grass at Belterra Park.

Like the King was no factor in his two main-track races. He would need the race of his life over a dirt surface on the first Saturday in May.

From a parimutuel perspective, all we can say is proceed with caution.

Godolphin Triples up with Rebel’s Romance

It remains to be seen if he makes the trip to Kentucky. Half of the past UAE Derby winners since the race began in 2000 have skipped the Derby.

Godolphin also has Proxy in the mix, so they have no shortage of ways to play the Derby game.